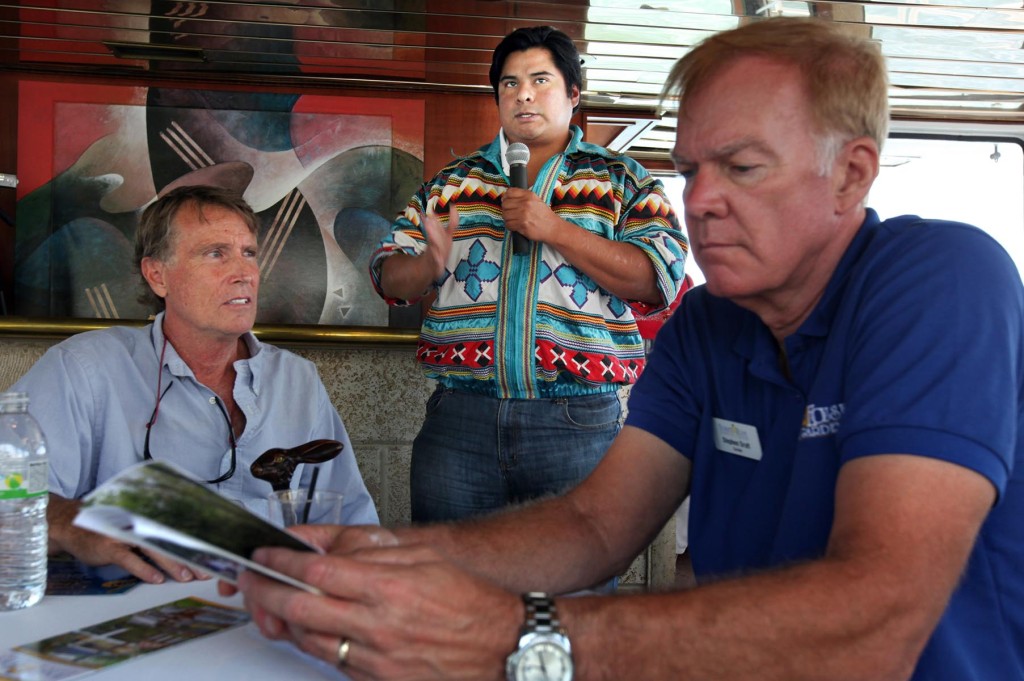 FORT LAUDERDALE — Those who believe that regional history began with Ponce de León’s discovery of Florida during the spring of 1513 are simply wrong, said local historian and author Bill Sydnor.

“Tequesta Indians made their home here during the time of Christ and before that,” Sydnor said during a yacht cruise April 5 with 130 history buffs along Fort Lauderdale’s New River.

Osceola, a great-great-grandson of the revered Seminole matriarch Polly Parker, provided a compelling account of what really happened between whites and Natives along the New River during the Second Seminole War.

“We are correcting what was told for so many years,” Osceola said.

One of the first inaccuracies regards the New River Massacre, the slayings by Seminoles in 1836 of pioneer William Cooley’s wife, three children and the children’s school tutor at their riverside settlement near the current Seventh Avenue boat ramp. It had been long believed by non-Natives that the attack was carried out for no reason except to whet a people’s savage tendency –  instead, Osceola said,  it was a retaliatory act during a time of war.

“It was the wild west during that time,” he said pointing toward the location near a fork in the river where the first of three U.S. Army forts, led by Major William Lauderdale, was built. There, the Army was ordered by President Andrew Jackson to clear the area of Natives and force them on the road to reservations in Oklahoma.

The Cooley incident occurred a year after the Dade Massacre, a victory for Seminoles and the event that launched the Second Seminole War. Matters escalated when Chief Alibama was brutally killed by white out-of-town hunters who were later identified to Cooley. But Cooley, who served as Justice of the Peace for the New River settlement, was ineffective and the men were not charged.

Though the Second Seminole War accounted for 1,466 recorded deaths of Army soldiers, only 328 actually died in battle. The majority of deaths were listed as “unknown disease.” Osceola said the Army’s miscalculation of climate and rough terrain benefited the Seminoles.

“It was heat stroke, water deprivation, hunger and other factors that they did not expect … Our main weapon was the Everglades,” he said. Even Major Lauderdale eventually succumbed to illness that began in the punishing Florida wilderness.

Highlighting the second and third Army fort locations, Osceola described how the Seminoles fought to stay, eventually to be driven into the Everglades to thrive unconquered.

At more than a dozen other landmarks, Seiler and Sydnor offered facts about Fort Lauderdale as it struggled through the early 1900s and now prospers – the Stranahan House where Frank Stranahan traded with the Seminoles through the mid-1920s, the Broward Performing Arts Center which is undergoing major expansion – and where Tequesta lived off the abundance of shark, crab and crayfish in the river; plant foods that grew off the river banks; and deer and birds that flourished in the inland woods.

On pillars under the Seventh  Avenue bridge, four mosaics pay homage to the early pioneers of the New River, the Seminoles who lived there first, and two historic city neighborhoods that sprang up along river banks.

The river served many military purposes through the decades – even as pirates attempted to rob and pillage. The Coast Guard still has a station at the mouth of the river near Port Everglades.

“There is so much history here that it boggles the mind,” Sydnor said.

About half the tour guests were Bonnet House members; the others were tourists.

Charles Bolick, one-third Iroquois who was raised in Pennsylvania, said he attended the cruise purposely to learn more about the Seminole Tribe.

“I always knew (the Seminole) were here, but I knew nothing about the history. Everett (Osceola) opened doors for me,” Bolick said.

Seiler said he learned more about the Seminole Tribe from the boat tour than he expected. He was unaware of connections evident through language and traditions that tie members with the Tequesta and even the prehistoric Calusa. He was also enlightened to how the Miccosukee and Seminole Tribes are tied by culture and family relations – but separate due to politics.

“We are not all about wars or casinos, and we are not just a relic of what happened on the New River. We are in the forefront of education, art, donating to good causes. We were and always will be part of the bigger picture,” Osceola said.

Seiler said today’s Seminole impact is prominent and vital. He clicked off several collaborative efforts including the Winterfest Boat Parade and last year’s historic re-enactment to save the city’s first post office near Stranahan House. A dugout canoe, carved by the hands of a Tribal member, is the eighth-floor focal point at Fort Lauderdale City Hall.

“We thank God that we made friends with the Tribe,” Seiler told Osceola. “They have been great friends to the city, the county and the state of Florida.”