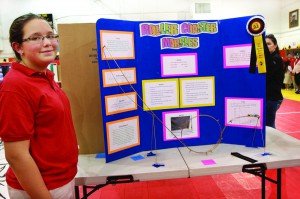 On Dec. 4 at the Herman L. Osceola Gymnasium, 58 science fair projects were showcased by dozens of students who shared their discoveries and explored new ideas.

“I had fun using tools like pliers, and I got to do a lot of measuring. Now, I know how a roller coaster works,” said Elise Brown, 11, who took second place among fifth-graders for her interactive project called Roller Coaster Marbles.

Children streamed to Brown’s display featuring multi-colored marbles that, when released at the top of a miniature roller coaster made of twisted metal clothing hangers, would demonstrate scientific terms such as potential energy, velocity and kinetic energy. The exhibit also proved Brown’s hypothesis that the roller coaster’s starting point should be high enough to enable the marble to “loop the loop.”

Other topics included the effects of gravity on human height, metal’s reaction to cold and hot water, the use of natural ingredients for common remedies, and whether more or less water added to dish soap makes the most bubbles.

Charlie Osceola, 8, won first place among fourth-graders for her project, Bug Off, which determined that cinnamon oil could be used as a natural and safe deterrent against unwanted insects – especially ants.

Osceola cut a banana in half, put cinnamon oil on one chunk, and then put 30 ants and both banana pieces under glass. She observed within hours that the ants steered clear of the cinnamon half or died when they tried to eat it, while the ants on the plain banana ate carefree.

Dasani Cypress, 13, took an entire month to research, gather and compile laboratory results through the Big Cypress Environmental Resource Management Department and to establish results for her project, which evaluated phosphorus content in water flowing in and out of the reservation.

The seventh-grade, first-place winner said she did not care whether she placed in the competition.

“I just wanted to know that if things dumped into our water [are] ruining the life cycle…we don’t want to kill our plants, fish or wildlife,” Cypress said.

By the end of the school day, first-, second- and third-place winners were named from grades four through 12. The top three overall winners from grades seven through 12 will be announced in January at the school’s annual awards assembly. Those three winners will go on to compete at the National American Indian Science & Engineering Fair and Expo in Albuquerque, N.M.

Ahfachkee School librarian Gary Chaffin, who manned one of four science demonstrations during the fair exhibit, said he was impressed by the quality of student entries.

Chaffin was one of four school staff members at tables where children stepped up to experience science firsthand. He showed kids how to use permanent markers and cloth to create colorful art. When rubbing alcohol, a solvent, was sprayed onto the marker designs, the colors spread through the fabric for a tie-dye effect.

Children also witnessed how elasticity in rubber works and how the human sense of touch is affected under freezing temperatures.

“As a teacher, I enjoy seeing the children go from stressed at the very beginning of the projects to so proud of their accomplishments later,” Rudolph said.