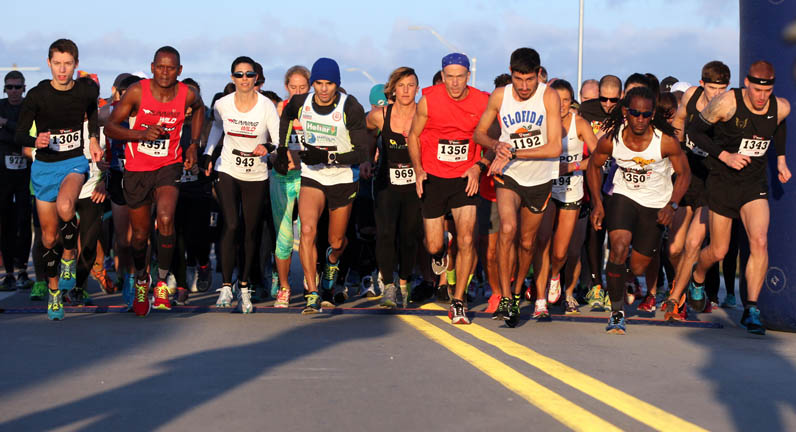 BIG CYPRESS — For serious runners, the second annual 10K Panther Prowl on the Big Cypress Reservation’s Snake Road was a training run with many benefits.

Temperatures in the low 50s along the USA Track & Field-certified course of asphalt and pasture road near the Junior Cypress Rodeo Arena provided natural air conditioning for putting legs and lungs to a grueling test Dec. 13.

Costa said he ran the 10K in Big Cypress as one of several practice runs he plans to make before taking on the next 26.2-mile Disney marathon Jan. 11. In Big Cypress, Costa finished first in 31:09 and took home $500.

Michael Vidal, 22, finished second in 32:35. The Florida Atlantic University distance runner is the FAU current record holder for the 800, 1500 and 3000 meters, and 5 and 10K races. Long distance Olympic runner Ronnie Holassie, of Trinidad and Tobago, also turned out to train. He came in third place at 32:50.

Among women, Alice Henley, 26, a Dania Beach lifeguard and Boston Marathon runner, won the top prize in 37:24. Daniella Espino, 24, winner of the 2013 Baptist Health Turkey Trot, took home second. In third was Angela Cobb, 31, a former NCAA All-American and the founder of Underground Runners, an organization that hosts races to benefit athletes and the environment.

Prize money was awarded in descending increments of $100 for first through fifth place in the male and female divisions.

More than a dozen Tribal members participated. In the men’s division, Jose Osceola placed sixth in the 35-39 age group, and Brian Billie placed seventh in 40-44. In the women’s 40-44 age group, Cathy Cypress finished fifth, two spots ahead of Marlin Miller.

Helene Buster ran in 1:23.00 with a broken toe. Buster, director of the Tribe’s Family Services Department, began racing in 2000. So far she has finished five marathons and five half marathons. Her second Panther Prowl was her second 10K.

“I love this run. My time wasn’t all that great, but it makes me run a little more to gear up for next year,” Buster said. “Panther Prowl is on the circuit now.”

Buster said runs on the reservation started with Rez Rally 15 years ago. The 5K event was created to promote healthier lifestyles and provide incentives for Tribal members to collectively combat increasing rates of diabetes and hypertension.

Now, the 10K attracts not only competitive runners to the rez but also weekend warriors, dieters and ordinary people who run for exercise.

Cheri Thompson, of Fort Lauderdale, started running for fitness last year when she was unable to run a single mile.

“Look at me now. I can run a 10K on a crisp morning, amid the openness of nature, under the vast blue sky, listening to cows in the pastures. That’s beautiful,” Thompson said.