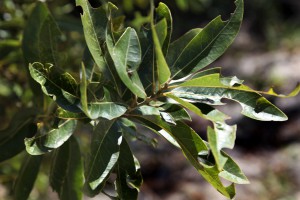 BRIGHTON — In the past decade, all over the Southeastern United States, millions of the familiar crooked, multi-stem redbay trees have already died or are in the throes of their last days. All along the lower coastal plains and swampy areas of South Carolina, Georgia, Alabama, Mississippi, Texas, Louisiana and Florida, vast areas of reddish-brown redbay woodlands have become graveyards of wilted, grayed, deceased or dying trees.

All are victims of laurel wilt, a disease of redbay, swampbay, avocado and other trees of the laurel family which succumb to a laurel-specific fungus (Raffaelea lauricola) that halts the flow of water in only laurel trees, causing the leaves to wilt. The fungus is carried into host trees by an Asian insect, the redbay ambrosia beetle (Xyleborus glabratus), which was first detected in overseas packing crate wood imported to Savannah’s Port Wentworth area in spring 2002.

Places like Brighton, Big Cypress and across the Everglades are now the redbay’s last stand. The glossy green scaffold of the Southern forests has been a major cultural staple of Florida’s indigenous peoples and their descendants – the Seminole, Miccosukee and Creek Indians. With its hardwood and shiny green, leathery, elliptic leaves, the aromatic redbay is a veritable major component of traditional Tribal medicine and ceremony.

But scientists warn the tree will soon be extinct in Southeast Florida – the finish line of a unique flora “death march” ongoing since the calamity was first noticed in 2002.

The revered redbay reached this critical point swiftly – and right before the eyes of scientists who have never seen a cultural/environmental decimation quite like this before.

“We have had die-offs before, but nothing like this. I have never heard of a phenomenon where literally millions of trees have gone down in just a few short years,” said Jason Smith, associate professor of Forest Pathology at the University of Florida, who described one grove in Duval County, where fatalities increased from 10 to 92 percent in just 15 months. “It is unheard of, unprecedented and it is happening right before our eyes.”

“You can say that again,” said Chairman James E. Billie, who claims he recently watched a whole strand of redbays wilt and die along State Road 70 near the Brighton Seminole Indian Reservation. “I drive by this area all the time and look for those trees. One day I noticed they were looking bad and it kept getting worse and then pretty soon they were all fallen over and dead.

“It occurred to me that this is really a tragedy for our Tribe. The redbay has so many cultural uses. You see a man walking by with a redbay leaf pinned to his shirt. You see the redbay at funerals. It has many, many medicine uses.”

Alarmed, Chairman Billie began to monitor redbay trees on his own property in Brighton and found them suffering as well. He invited Smith to Brighton recently to assess the situation.

Smith, who along with University of Florida Institute of Food and Agricultural Sciences (IFAS) Tropical Fruit Crop Specialist Jonathan Crane and Florida Division of Forestry Entomologist, Albert “Bud” Mayfield, produced the 2011 landmark report on the issue, Laurel Wilt: A Threat to Redbay, Avocado and Related Trees in Urban and Rural Landscapes.

The scientist held up a small glass vial that appeared to have several tiny black specks floating in water, each about the size of Lincoln’s nose on the U.S. penny.

“This is the culprit,” Smith said. “The redbay ambrosia beetle.”

As Smith explained it, ambrosia beetles are wood-boring insects that typically attack trees and shrubs that are already stressed, dying or dead.

“For reasons we do not yet understand, this beetle attacks healthy trees of certain species in the laurel family, particularly redbay,” said Smith, holding up a sample cutaway section of redbay trunk showing numerous teeny pinholes. “The beetle bores into a host tree, creating these pinhole tunnels and inoculates the tree with fungal spores carried on its body.”

Smith said it is this fungus, not the beetle, that kills the tree moving through its water and nutrient transport system to plug the flow of water and cause the tree to wilt. “Since the redbay and the laurel wilt disease evolved in separate places half a world apart, the tree has no resistance other than to offer these invaders a buffet half a continent wide,” he said.

The insect made its way to the U.S. by hitching a ride on a container ship all the way from a native landscape in India, Japan or Taiwan, said Smith. U.S. scientists didn’t realize the severity of the beetles’ impact until two years later, when thousands of redbay trees were reported dying on nearby Hilton Head Island, S.C.

Since then, the fungal disease carried by the beetle has been identified as the killer of uncountable numbers of redbay trees in more than 33 counties in South Carolina, Georgia and Florida.

“It’s maddening to think something so severe could just arrive here in a packing crate or in firewood, that such destruction is born so easily,” Smith said, noting that of the 55 alien bark and ambrosia beetles that have been “accidently” introduced onto the U.S. continent in the past 27 years, “the redbay ambrosia is the only one to prey on living, healthy trees.”

Smith said, after struggling for years to find a way to stop the highly contagious disease, scientists have only recently identified several techniques that may work, including propagating individual redbay trees that seem immune to the ambrosia beetles’ fungus.

“We’ve noticed an entire swath of trees, all infected and dying, and there in the middle of it all are a couple trees growing naturally with no seeming affect from the fungus all around them,” said Smith, who has appeared at a Big Cypress community meeting and consulted with Seminole Tribe Forestry on redbay matters in the past year. “We want to locate, examine and propagate those trees and grow new stronger wilt-resistant trees using the very genetics that seem to survive this horrible fungus.”

“Think about it. Much of the canopy cover, thoughout the tree islands of the Everglades, is provided by swampbay trees, which can grow tall and spread out with room,” Smith said. “If those trees start dying in massive numbers, as has been the case elsewhere, you will lose that important cover. Here you are spending millions to restore the Everglades and the whole region is changing because the trees are dying and the cover’s gone…and it has nothing to do with the water table.”

The state’s avocado crop earns about $30 million wholesale each year – the second-largest fruit crop in Florida, after citrus. Most of this industry is crammed onto 7,500 acres of grove land located mostly in Miami-Dade County – a sitting duck for the sort of swift, large-scale laurel wilt infestation which has decimated non-commercial trees in similarly sized tracks in Georgia.

Desperate, as the “march” gets nearer, the avocado lobby is pressing the Florida legislature for money for pesticide development. No pesticides, however, have yet been proven effective against laurel wilt disease, said Smith’s associate Dr. Mayfield, who said “even if such a remedy was found, we’re certainly not going to save our forests with fungicide injections, tree by tree. This would be limited to park and landscape situations.”

Redbay is a low-profile tree. Commercial timber companies don’t harvest it for profit. Redbay wood is sought mostly by fine carpenters for cabinetry, bannisters and boat building. Historically, Southern cooks use the leaves for flavoring gumbos or stews. Most people don’t realize the trees are even there – until they are gone.

For example, Duval County’s oldest, shadiest neighborhoods appear devastated with huge gaps in the canopy and a dappled brown shroud over the prettiest, most natural areas near the northeast Florida coast; the neighborhoods below are devoid, now, of the crisp menthol fragrance which saturates the air beneath redbay cover – stolen by the laurel wilt’s lethal epidemic.

The cultural value of the trees, however, “definitely needs to be brought to the table,” said Smith, who has brought the Chairman a comprehensive plan to save the trees by enhancing preservation programs to include Tribal lands. He has also appealed to the Florida legislature and various state agencies for funding.

“The Indians make a very compelling point that many of us scientists and researchers don’t know enough about. The redbay is a valuable tree to their culture and that is just as important as any environmental or commercial reasoning for action to save this resource,” Smith said. “Whatever happens, it needs to happen soon. This situation is not going to go away. By the time we figured out what was going on, half the trees were gone.”

Smith plans to return to Brighton soon to personally take cuttings from Tribal members’ redbay trees; he will transport the cuttings to a University of Florida laboratory, where special horticulture treatments can preserve and “grow” the cutting.

“If anyone has a special tree, or knows of a special tree which is used for medicine or other cultural reasons, let me know and we will try to do what we can to save it… if it is not too late already,” he said.