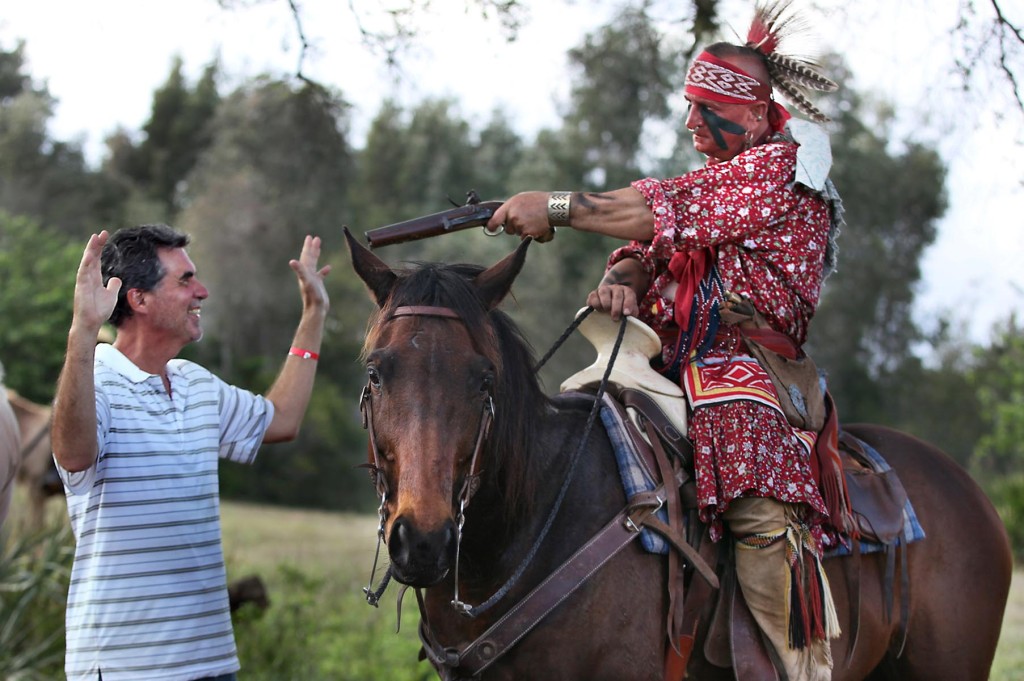 Add men preparing to battle for land and sovereignty, and the canvas came alive for the Big Cypress Shootout – Second Seminole War Reenactment.

“We’re creating a snapshot in time that is very poorly taught in school,” said Paul Rowley, of Alachua, who portrayed “Big Turtle” in the 17th annual Shootout that always ends in the same, historically correct way – in victory for the Seminoles.

Thousands turned out for the Jan. 31 through Feb. 2 event to relive the bloody conflict in the Everglades that pit the U.S. Army against Seminoles who had been pushed deep into the Everglades by war. The clash at Big Cypress recreated one of many skirmishes in the campaign that was won by Seminole guerilla warfare – surprise attacks on Army troops in the Seminoles’ own backyard.

Army troops, forced to fight in the open field, were subjected to gunfire that came from seemingly nowhere. Seminoles, supported by bands of freed or escaped slaves, attacked from inside the marsh’s thick foliage.

“John Wayne did not win this one. You are about to see why we Seminoles are the Unconquered,” said Wovoka Tommie, a Tribal compliance officer at the Big Cypress Council Office, to a throng of spectators that included Boy Scout troops, tourists and history buffs. “This is what our mothers and fathers went through to maintain our freedom. This is why you are all sitting right now in another country – our sovereign nation.”

Rowley, of Muscogee descent, said he spends the weekend entirely entrenched in Seminole culture. This year, he pitched a fabric shelter with history teacher and 14-year reenactor Jeremy DeBary, of Muscogee and Cherokee descent.

DeBary, whose wife and son also portrayed Seminoles at the camp, said reenactors spend thousands of hours studying and working to authenticate their depictions. Dressed head to toe in period clothing, the DeBarys cooked over an open fire and tended to daily chores using tools and artifacts from the time or items they fashioned by hand using period techniques.

Family living in the encampment is historically accurate, DeBary said. Men did not leave women and children alone in villages during conflicts or treaty meetings for fear they would be captured by the Army and banished to Oklahoma.

Besides, he met his wife, Emily, also a long-time reenactor during a Creek war event in Georgia that required him to “raid” a village of settlers.

“I was the Creek and she was the settler. I threw her over my shoulder, ran off with her, and we’ve been together in re-creation ever since,” DeBary said.

All reenactors, some with no Native American heritage, necessitate the past and give honor to Seminole survival.

History fan Robert Burns, of Davie, stepped out of his open-sided tent to display a 1728 Brown Bess – flintlock, muzzle loaded rifle that was likely used to defend Seminole land. Don VerWiebem, of Merrit Island, likes to feature furs and hides that he tans himself using methods taught by Seminoles for centuries. Laney Burney is most proud of the Seminole pumpkins and other native foods, such as dollar weeds that taste like parsley, that she grows herself to serve to curious spectators.

The only wigwam in the encampment is erected annually by Iroquois and Seneca David Pierce, of New York, who drives down to Florida to represent the part his ancestors played in Seminole history.

Pierce cooks potatoes and onions for dinner every night – once in while tossing a slab of bacon into the pan. His father’s hatchet is used to chop wood for the fire and his mother’s kettle provides boiling water.

“It’s documented that at least 10 Blackfoot fought alongside the Seminole. We’re all extended family,” Pierce said.