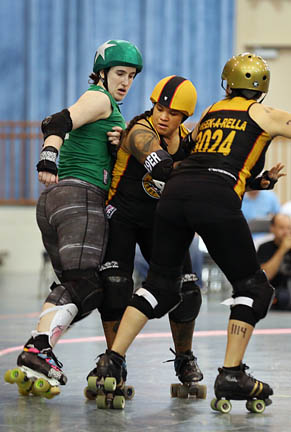 FORT LAUDERDALE — Growing up as a tomboy in Hollywood helped prepare Meredith Bullard for the fast-moving, aggressive contact sport of roller derby, her activity of choice.

Bumps, bruises and injuries are part of the game, but Bullard, aka Pow Pow Panther, shines on eight wheels as a member of the Gold Coast Derby Grrls team.

“It’s challenging,” said Pow Pow Panther, who tried other sports, but nothing piqued her interest like roller derby. “It’s tough, fast-paced and I like the strategy. I also like the camaraderie and being part of a team.”

Gold Coast plays in the Women’s Flat Track Roller Derby Association (WFTDA), which has 301 leagues around the world.

The original roller derby was played on banked tracks from the 1920s to the 1970s. The sport was revived in Texas in the early 2000s as a flat-track version of the game and has steadily grown in popularity.

Skaters take creative derby names to embrace the tougher, edgier side of their personalities. “When you step into the rink, your derby alter ego takes over,” reads the WFTDA website.

Although it looks like chaos on the track, the basic rules of the game are straightforward. Two teams of five skaters each – four blockers and a jammer – vie for points. Only the jammer can score and does so by passing opponents after her first lap around the track. The blockers, who play defense and offense, block, shove, push and get in the opposing jammer’s way while also trying to create an opening for their own jammer to pass through and score.

“The hardest part is the amount of training and skill it takes, but I enjoy being out there on the track, training hard and working for a goal; it’s the best feeling,” said Pow Pow Panther, who mostly blocks but sometimes fills in as the jammer.

“She is a great asset to our team,” said Gold Coast head coach Derrick DeRosa, aka Bare Lee Human, whose team finished fourth in the divisional playoffs last summer in Ontario, Canada. “She’s always been a solid player. She is the second Native American to score points in the playoffs and she holds the record with 23 points.”

Pow Pow Panther’s teammates appreciate and rely on her skill on the track.

“She is quiet; you don’t hear much from her,” said training coach Mary Engleman, aka Lucy Lunatic. “But she will always surprise you with her strength, really nail somebody and knock their lights out. She’s the strong, silent type.”

A formidable player, Pow Pow Panther is a force to be reckoned with on the track.

“She brings a [load] of power and stability,” said Olga Montealegre, aka Bandita. “You can always count on Pow Pow.”

“She’s a powerhouse and can knock her way through a pack,” added Gillian Sullivan, aka Barbwire Gordon. “She can play any position; I rely on her to be there when I need a brace when I’m a jammer.”

But after five years of roller derby, Pow Pow Panther is ready to be Meredith Bullard again. The mother of Louis Billie, 7, and Tatum Billie, 6, said the sport takes too much of her time and this will be her final season.

Bullard plans to pursue her passion of filmmaking. She attended a film school in Miami and now wants to continue her studies in screenwriting and cinematography, possibly at Miami Dade College.