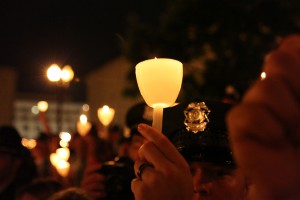 “It’s an opportunity to fellowship with all the staff, not only with the Explorers, but with their families,” SPD Chief William Latchford said. “We have a great support system with the Explorer parents and other siblings in the family, and they’ve joined us this year and we’re just so honored.”

The Explorers program is designed to bridge the gap between youth and police. It is open to youth from 6-17 years old.

“I think this is another great thing that I think the Tribe is doing that is geared to our children to help them to be able to interact with our police department (and) get to know who our police officers are so that they know who the safe people are in our community,” said Family Services director Helene Buster, who received an invitation to attend the event from Chief Latchford.

The Explorers held several reservation-wide fundraisers, including bake sales, car washes and raffles, in order to raise more than $20,000 to contribute to the cost of the trip, Lt. Lisa Bennis said. Chief Latchford even volunteered to be Tased to help raise money.

Hollywood Tribal member Lila Osceola, one of the parents who went on the trip, said the community’s efforts were worthwhile.

“I am very grateful to be here,” she said. “I have my kids in this program. I think it’s great for them, positive and puts them on the right track.”

Although the Explorers had fun visiting several monuments and museums, their main agenda took on a more serious tone.

National Police Week was an initiative signed by President John F. Kennedy in 1962 to salute the nation’s officers who paid the ultimate price. It has evolved into an annual event in which thousands of law enforcement officers from around the world join family and friends of fallen officers in Washington, D.C.

Navajo Gloria Curley attended the Police Week memorial services to honor a loved one she lost in the line of duty.

“We all feel sad, yes, but this is a time when we can understand ourselves and each family is able to be here to understand themselves that their love is being shared with other people,” she said.

“It really means a lot to me mostly because I have made so many friends through this organization, and I actually come back every year because this is the only time I really get to see them, and they really understand,” she said. “We all have gone through the same tragedy, so it’s really comforting to have those kinds of people around.”

A candlelight vigil served as the opening act to a week of respectful tributes to the men and women of law enforcement, which also included a memorial parade and a memorial service featuring a speech by U.S. President Barack Obama.

“Most of all, I want to acknowledge and thank the families of those who have fallen,” President Obama said.

Also, a police memorial wall served as a place where visitors could remember the thousands of fallen heroes whose names were engraved in the wall.

For Family Services’ Buster, it was a moving experience.

“You hear on the news all the time (that) a police officer got shot or something like that, but to actually see the wall and their names up there and, you know, the rows and rows of names up there, it’s like the Vietnam Wall, you know, very similar to that, and it really impacted me.”

One of those names had a particular connection to the Seminole Tribe of Florida.

SPD has lost one officer in the line of duty. In 1986 while driving home from the Big Cypress Reservation, Lt. John Healy was involved in a fatal car accident.

“We’re up here honoring him also,” Chief Latchford said, pointing out that the Explorers paused to etch his name onto sheets of paper to take home with them. “They can bring that back and realize and remember that their police officers, too, are special to them.”

The Explorers also had the opportunity to trade challenge coins with other law enforcement personnel, including one that honored Lt. Healy.

“This event kind of commemorates their life, their job, what they do for our people and how we respect them for the work that they do,” SPD community liaison Diane Buster said.

In keeping with the theme of fallen heroes, the Explorers visited the Arlington National Cemetery, as well as the Pentagon, where they got an up-close look at the exact spot where one of the hijacked planes crashed on Sept. 11.