BIG CYPRESS — Most runners who showed up before dawn Oct. 30 for the inaugural Hard Rock Half Marathon and Seminole Tribe sponsored 5K and 10K Pink Panther Prowl cared less about winning and more about the cause. The race that cut through the streets of the Big Cypress Reservation was held to mark Breast Cancer Awareness Month.

“We’re not competitive. It’s a personal journey,” said Pam Miller, of Hollywood, who ran the 5K with her friend Meloni Bocus, also of Hollywood. “We know friends and family who have battled breast cancer. It’s hard to find anyone who hasn’t been touched by it.”

Still, about 300 people participated and were officially timed in the three-race event sponsored by the Tribe’s Health Department in partnership with the Seminole Hard Rock Hotel and Casino and operated by Split Second Timing. The race was originally scheduled for Oct. 8 but was postponed under the threat of Hurricane Matthew.

First place winners of the half marathon were Tim Setterlund, 34, of Boca Raton, who finished at 1:45:01among men, and female runner Marlene Persson, 46, Deerfield Beach, who crossed the finish line at 1:34:29.

More than a dozen Seminole Tribe citizens laced up their running shoes to complete the 5K or 10K. Dozens more came out to cheer. Nearby, under a chickee between the race start-line and finish line at Junior Cypress Rodeo Arena, Marcellus and Trisha Oscoela and Mary Jo Micco cooked free plain and pumpkin frybread.

In the 10K, Cathy Cypress finished as the top master female (56:57) and took fourth place overall among all female runners. Other Seminole 10K winners included Clinton Billie, who was first (54:30) among men ages 30-34, and Lenore Roberts (1:02:53) and Marlin Miller (1:10:3) who came in first and second, respectively, among females in the age 40-44 category. Erika Tommie, of the Santee Sioux Tribe of Nebraska and a Hollywood Reservation resident, came in fourth place (1:31:38) in the female age 45-49 category.

Clinton Billie said he prepared for months to finish the run. It was his third attempt since the Health Department’s Allied Health Program launched the Panther Prowl 5K and 10K races through Big Cypress in 2014. But this one, the first dedicated to breast cancer awareness, was too special to go halfway — his great grandmother battled breast cancer.

“I’m finally doing it. I did a lot of biking, a lot of training. Healthy living goes a long way,” Billie said.

“To have something open to the public and the Tribe really emphasizes health and wellness for everyone,” Hinote said. “We are always doing events to fight diabetes and to get people out doing healthy activities. This way, everybody can come out to the reservation, compete with their families and stand together. Health is the main message.”

Kiko Reverte, of Hollywood, who placed as the top master male in the 5K, said the run was his third Panther Prowl on Big Cypress. This time, he and a handful of friends from the U.S. Citizenship and Immigration Services (USCIS) based in Miami came out dressed in pink veils and other girly “pinktober” regalia.

“We’re running for a friend with cancer,” Reverte said. “We’re not professional runners; we just do it for fun, to support an excellent cause and to run here (Big Cypress). It’s safe, full of fresh air, exciting and always friendly.” 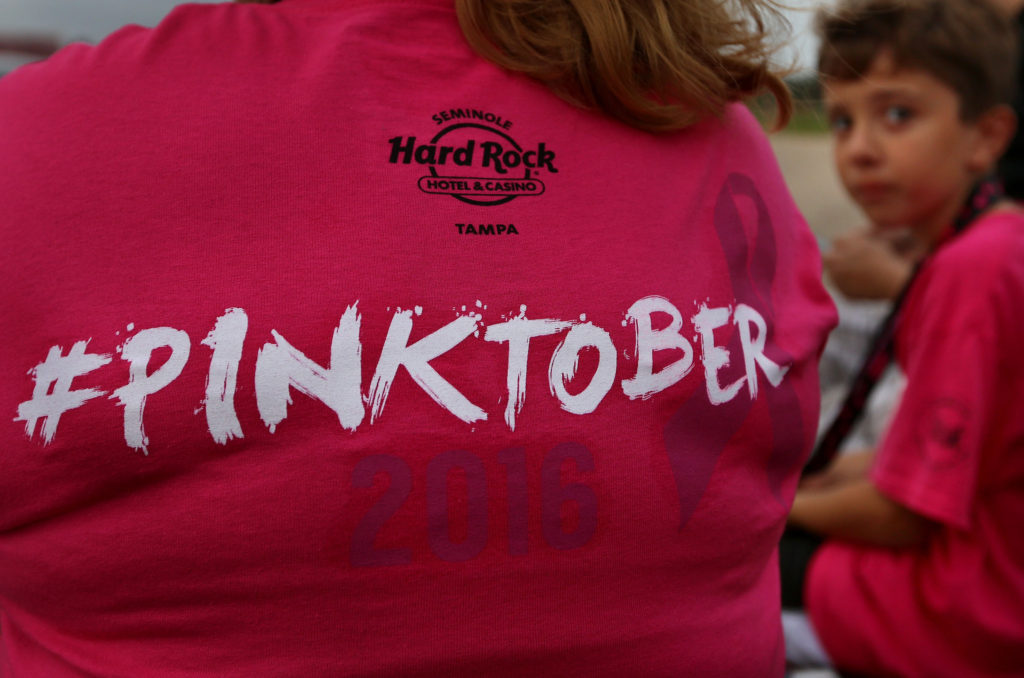