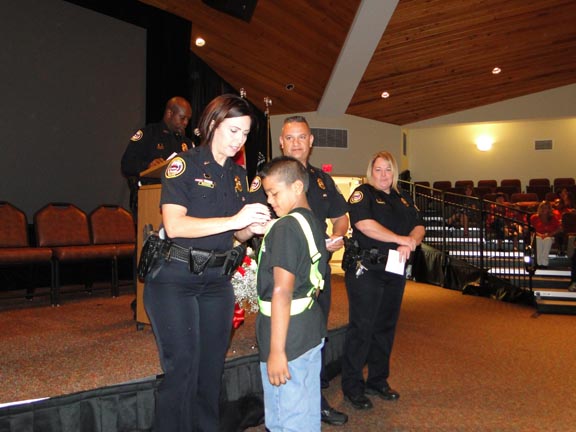 After reciting the Pledge of Allegiance and singing the national anthem, students Rudy Juarez and Jenna Brown read their “What it is to Thank a Veteran” essays.

Brown recalled stories her “Papa Brown” (veteran Ulyss Brown) told her about his service to the country, including how he barely escaped death by grenades on several occasions. She thanked all veterans for risking their lives for freedom.

“He and all the other awesome people that fought for our lives deserve so much respect,” she said.  “Veterans are the real heroes, and we should be giving thanks to them, not taking pictures with Superman at Sea World and thinking it’s the best thing in the world.”

A slideshow assembled by Quenten Pritchard’s class ensued. It, too, thanked veterans for their service.

Middle school teacher Diana Greenbaum also gave a heartfelt thank you to veterans in honor of her late father, a disabled veteran from the Korean War.

“Veterans never discriminate against who they protect; skin color doesn’t matter; race doesn’t matter. They protect us all without a moment’s notice, without regards to their lives. You all are truly heroes of our great nation. Thank you to all veterans,” Greenbaum said.

A moment of silence followed to honor fallen servicemen.

Darryl Allen, of the Seminole Police Department, took to the podium to introduce the newest members of the Safety Patrol.

The Safety Patrol gives students an opportunity to serve their community and school as a volunteers. The organization teaches citizenship, leadership, service, responsibility and good will. To participate, students must maintain C-averages and satisfactory performances on their report cards.

One by one, each student officer received a safety patrol pin. Lt. Lisa Bennis, of SPD, swore in the newly inducted officers – they raised their right hand and recited an oath.

The ceremony ended with the veterans and newly inducted officers forming a receiving line so the community could thank them for serving their country, community and school.