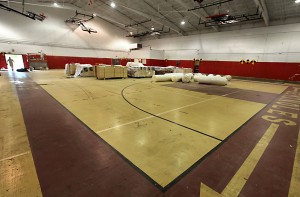 Jumper practically grew up in the gym having spent portions of nearly every year of his life engaged in some sort of athletic, school or community happening that took place on the concrete, painted gym floor.

Since Sept. 9, renovation crews have been giving the gym an inside makeover. With bleachers removed, workers stripped the mats off the floor and revealed the time-worn graphics. By Sept. 11, the center of the gym was piled high with pallets of plywood and the same 2.25-inch high tech wood flooring used in NBA courts.

Recreation director Richard Blankenship said athletes will feel like they are “running on pillows” compared to the old floor.

“It won’t make balls go into baskets, but it will improve wear and tear on the body,” he said.

The stress-relieving floor is constructed with a moisture barrier, a thick layer of resilient pad, two layers of hardwood subfloor and a maple parquet top layer. The “give” of the floor absorbs shock, reduces stress on joints and decreases the potential for injury.

Four sets of new bleachers – two on each side of the gym – wall padding, new basketball hoops and fresh coats of paint will complete the renovation.

The project is the second phase of a face-lift that began in early 2012, said Michael Shane Kelly, Construction Management assistant director. By Sept. 12, 2012, a new entry canopy was installed, a new roof crowned the building and a bronze statue of Lance Cpl. Herman L. Osceola – a Tribal member who was killed in 1984 during a U.S. Marine training mission in South Korea and for whom the gym is named – had been erected.

“The second phase may take a few months but the wait will be worth it,” Kelly said.

Blankenship said the job will likely be finished by mid-November.

“The gym has always been a great home, but now we’re giving the community something more to be proud of,” Jumper said. “When you come out to cheer on the home team, you want to sit on the home side.”