Skip to content
You are here
Home > Community > Native artist, one man show 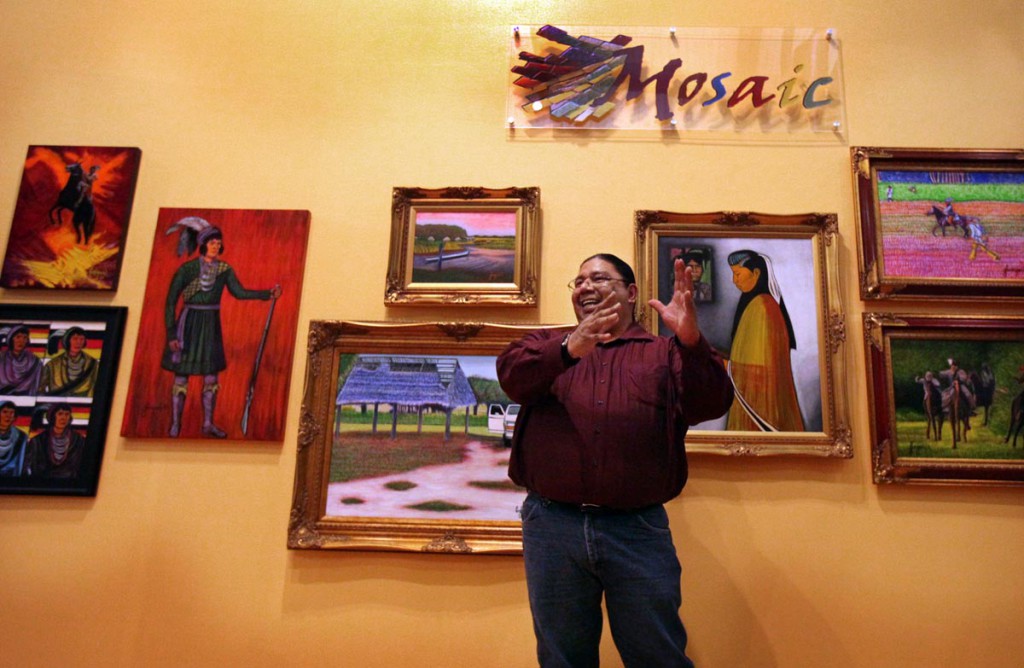 BIG CYPRESS — For the second time in less than two years, works by Seminole artist Elgin Jumper are in the spotlight at the Ah-Tah-Thi-Ki Museum.

Vivid colors flow like poetry from the first portrait to the last of Jumper’s 12 paintings featured on the Mosaic Gallery wall – a section of the Museum reserved for art created by community members.

“The new exhibit is my evolution as an artist . . . it’s a conversation, a dialog – like a stone skipping across the water,” Jumper said during the Sept. 25 public opening of the one man show.

All but one piece was created since his last show in June 2012.

Jumper said the exhibit is also a responsive statement to the art he has enjoyed during his past decade of serious painting and a “shout out” to the artists who inspire him.

Henri Matisse’s famous Green Stripe gets a nod with Jumper’s impressionistic portrait of King Philip, a Native American hero who led an uprising against the English after the collection and shipment of Natives to the West Indies to be used as slaves in the 1600s.

In a modernistic self-portrait, Jumper tips a hat to the late T. C. Cannon, a member of the Kiowa Tribe, who made his artistic mark in the early 1970s with a show featuring Cannon’s Southern Plains style at the Smithsonian Institution.

Rebecca Fell, curator of exhibits at Ah-Tah-Thi-Ki, said Jumper’s work conjures themes about the Seminole Tribe and reveals what those themes mean to him personally. Jumper’s hand is evident in his unique use of color and brushstrokes, she said.

“Elgin talked about coming into his own style and here we see it happening,” Fell said. “There is fluctuation from one piece to the next but there is the thread of ‘Elgin’ that ties them together.”

In Billy Bowlegs Goes to Washington, Jumper borrows from the 17th-century painter Johannes Vermeer, and a quad-portrait of Osceola is doubtlessly Andy Warhol-esque.

But not all of Jumper’s newest works are inspired by world-renowned artists.

Safari Sunset was painted from a snapshot taken of Jumper’s father canoeing on the Big Cypress Reservation; The Pick Up Artist came to him while painting near a chickee off Josie Billie Highway with Seminole painter

Jimmy Osceola; and Big Cypress Shootout was plucked from a photograph in The Seminole Tribune.

Born in Fort Lauderdale and raised in Hollywood, Jumper said he has been drawing and writing most of his life. His teacher, Nilda Comas, founder of Legacy Art Studio in Fort Lauderdale, called Jumper “a Renaissance man.”

“Elgin is always studying, reading, writing poetry. I’ve seen his progress in leaps and bounds. He is my best student,” Comas said.

For Jumper, his art is in a constant state of personal evolution – and revolution.

“For me, perception is not just where lines converge. To perceive is also to conceive,” Jumper said. “I’m about a different perception, about finding a new way of presenting Seminole art.”