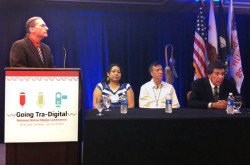 SANTA CLARA, Calif. — The Native American Journalists Association (NAJA) embraced the past and present at its annual conference July 10-13 in Santa Clara, Calif.

“Our traditions shape our culture and we are carrying that into the digital realm,” said Rebecca Landsberry, NAJA membership and communications manager. “Social media is changing the way we do journalism.”

NAJA also provides a network of support for its members, including a legal hotline.

Conference seminars and panel discussions touched on ways to tell stories using new platforms, while protecting the Native voice in the media.

“Mobile training is important to get the stories out,” said Dalton Walker, of the Ojibwe Tribe. “We need to take the traditional and bring it to the digital so our stories aren’t lost. Digital will capture stories for the future. It is the new tradition.”

Former NAJA president Mark Trahant, of the Shoshone-Bannock Tribes, said Native stories cannot be told unless they are shared, re-posted and sent around using new media.

“Social media is our history,” said Trahant, an independent journalist and teacher at the University of Alaska Anchorage.

For 20 years the conference has offered student journalists hands-on experience in the field. This year five high school and nine college students worked with mentors in print, radio, video, social media and online mediums to cover the conference and develop feature stories. The stories were shown in video presentations and were printed in the Native Voice newspaper.

“Establishing NAJA as a pipeline for Native students going into the media is one of the most important reasons we’re here,” said Landsberry, of the Muskogee Creek Tribe. “Whether the students go into mainstream or Tribal media, NAJA is proud to highlight them as they move up in their careers. Former students are now on the NAJA Board of Directors. It’s come full circle.”

The conference boasted its highest attendance in years; 310 journalists came from around the U.S. and Canada.

“There’s an energy I haven’t felt before, a momentum,” said NAJA executive director Pamala Silas, of the Menominee Tribe. “People are revved up and ready to get serious. There’s a renewal of confidence and people are taking a breath.”

The 30th anniversary of the organization was also commemorated with a panel discussion on freedom of the press. NAJA president Mary Hudetz kicked off the anniversary luncheon.

“Thirty years ago, some people gathered to discuss the challenges facing them, including freedom of the press,” said Hudetz, of the Crow Tribe. “Thirty years later, that’s still a challenge.”

A panel of journalists from the Osage News, Cherokee Phoenix and Navajo Times discussed free press issues they have faced. The Osage, Cherokee and Navajo Tribes all have constitutional amendments allowing for free press, but the newspapers still run into issues with their Tribes.

The Osage News and the Cherokee Phoenix have editorial boards to buffer them from conflict with Tribal leaders. The Navajo Times is incorporated as a for-profit corporation with shares owned by the Navajo people.

“We gained the trust of our readers, and they trust us to tell the truth,” said Tom Arviso Jr., CEO of Navajo Times Publishing Co.

Certain information will never be covered through their respective newspapers, radio broadcasts and television stations.

“We all share a respect for our culture,” said Bryan Pollard, executive editor of the Cherokee Phoenix. “We don’t report on some ceremonies; our people determine our boundaries.”