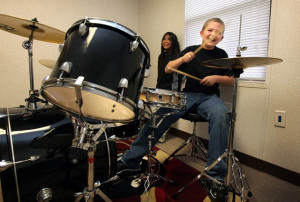 For five years, Tribal kids have pounded out rhythms on drums, guitars and keyboards at music lessons disguised as fun at the club’s four locations. Most children have no idea that they are key players in an ever-growing music and media production and performance program buoyed by Tribal Council and operated by professional musicians.

Robert North, director of the Boys & Girls Clubs (BGC) tribalwide, said the blossoming program for kids ages 7 and older is rooted in the club leadership’s own knowledge about music instruction.

Originally, private music teachers were contracted from the outside to teach kids – a move that proved unsuccessful largely because of the culture gap, North said. When Payne was hired five years ago to be a counselor, his experience as a professional musician, private music teacher and church music director was a bonus.

Bryan Granie, North’s assistant director of BGC, is also a musician. Together, Granie and Payne oversee the purchase and installation of all BGC sound and media equipment. So far, the Hollywood club features a recording and production studio. With recent Council financial support, Big Cypress will also get recording and production capability. Additionally, both sites are in line to receive performance theaters, North said. Immokalee and Brighton clubs are next for enhancements.

“It has taken years to put together a viable music program that is available at all of our four club locations,” North said. “The bigger picture is (about) encouraging, allowing and providing formats and venues for our Tribal youth to express themselves.”

Payne makes weekly rounds to provide music classes at all of the clubs, but he plays his lessons “by ear.”

“I never know what I will walk into,” he said. “With kids this young, if I drive a hard curriculum they will retreat. I keep it fun so when they see they can play a song, I can help make it real.”

Peripherally, the children learn how to handle the instruments, keep time, recognize verses and choruses, and appreciate song structure. Basic music theory, such as music as a language, is also taught but in smaller groups or individually depending on the interest of the child. Lessons are loose and informal but can be amped up at any time.

Leviticus “Lee” Berry, a natural on the drums, likes playing the piano. He is purposefully memorizing the notes of the treble and base clefs at the Brighton club.

“I can play ‘Mary Had a Little Lamb’ because I can read the music – like the scales,” he said.

Jason, though he most enjoys “freestyle” playing on a whim, is also open to formal training.

At the Hollywood BGC on a recent Friday, Isabella Josh, 9, was all about formal instruction using both hands to play the chords on the bass clef and the melody on treble clef to “Ode to Joy.” She read and played all notes while counting time for each note according to whole, half and quarter notes.

For nearly every child, there is a different expression and desire, Payne said. For Dwayne Billie, it’s country music. For Jason, it’s pop. Lee likes rock. Isabella likes it all.

“At first they were timid and didn’t want to be put on the spot. But now, they ask for him,” Maudlin said.

The students are also making marked improvements – an opinion based on what her ears tell her.

“For the first few weeks? All noise. Now, I hear rhythm and music,” she said.

North’s son RC North is now a member of the alternative progressive rock band Hybiskus, which performed last year at the 31st annual Gathering of Nations in Albuquerque, New Mexico. Cameron Osceola, the eldest of The Osceola Brothers Band, which performed Jan. 9 at the Hard Rock Cafe, was also a BGC member, North said.

“After-school and summer programs allow participating youth to express themselves in a positive manner and gain vital social interactive skills,” North said. “I think we have pretty close to the perfect formula for providing the performing arts opportunities to all participating club youth.”