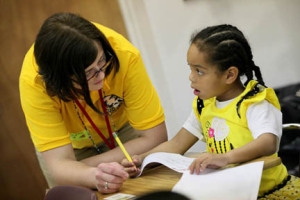 “Learning doesn’t always happen on the Internet or in a classroom,” said Teresa Hoercher, tutorial coordinator for the Cayuga Community College (CCC) Center for Academic Success.

Hoercher led the off-campus travel component to the three-credit course, called Interdisciplinary Study in Native American Culture and Education, from Jan. 10-16. For the fourth time since the elective was created in 2010, Ahfachkee served as a learning laboratory.

At night, Hoercher and CCC students Lyndsay Corey, Vanessa Regis, Brandy Collard and Michele Walters were at home in a cabin at the Big Cypress RV Resort. During the day, the students busily assisted teachers from recess games of duck, duck, goose with Jill Grismore’s first-graders to helping Alicia Murray’s fifth-graders understand the civil rights movement.

Acting Ahfachkee principal Jillian Wilson said the visiting CCC students, though different every year, have become an annual bonus to the school calendar. They provide helping hands for the teachers and are a novelty, as special guests, to students.

“The kids grow attached to them almost instantly, especially in the primary grades. We already look forward to having them back next year,” Wilson said.

Hoercher said she and CCC’s education coordinator Patricia Gridley created the program to provide future teachers a unique chance to explore education outside ordinary American schools and inside the realm of Indian Country.

Tribal communities like the Onondaga Reservation exist in central New York, but at the time of the program’s inception, Ahfachkee high school students were learning core courses via the Internet, which piqued Gridley’s interest. This year, Gridley and Hoercher chose Ahfachkee for its cross-curricular culture classes.

“It is huge that the school incorporates culture into the curriculum. It is a power statement that the school puts Seminole heritage into education because it is also the future,” Hoercher said.

Still, the two admitted that spending a week in Florida in January can’t be beat. Part of the cultural experience included a Sunday afternoon tour of Ah-Tah-Thi-Ki Museum and Billie Swamp Safari.

Corey said she and her peers felt welcomed at Ahfachkee from the time they were introduced. Each had opportunities to lead classroom lessons; assist children one-on-one with mathematics, writing and reading; and observe various teaching styles while all teachers followed the school’s CHAMPs classroom management strategy. CHAMPs is an acronym for Conversation Help Activity Movement Participation, which leads to success.

“Teachers always want to give the next generation of teachers the best real experience of what the classroom is really like. It’s giving back to future teachers,” Wilson said.

Eventually, the Cayuga students treated Ahfachkee students to a PowerPoint presentation about what life is like in central New York.

They included the dreaded winter weather.

“It was 9 degrees below zero with the chill factor on the morning we left. We wanted to bring a snowball, but couldn’t. Next time,” Hoercher said.