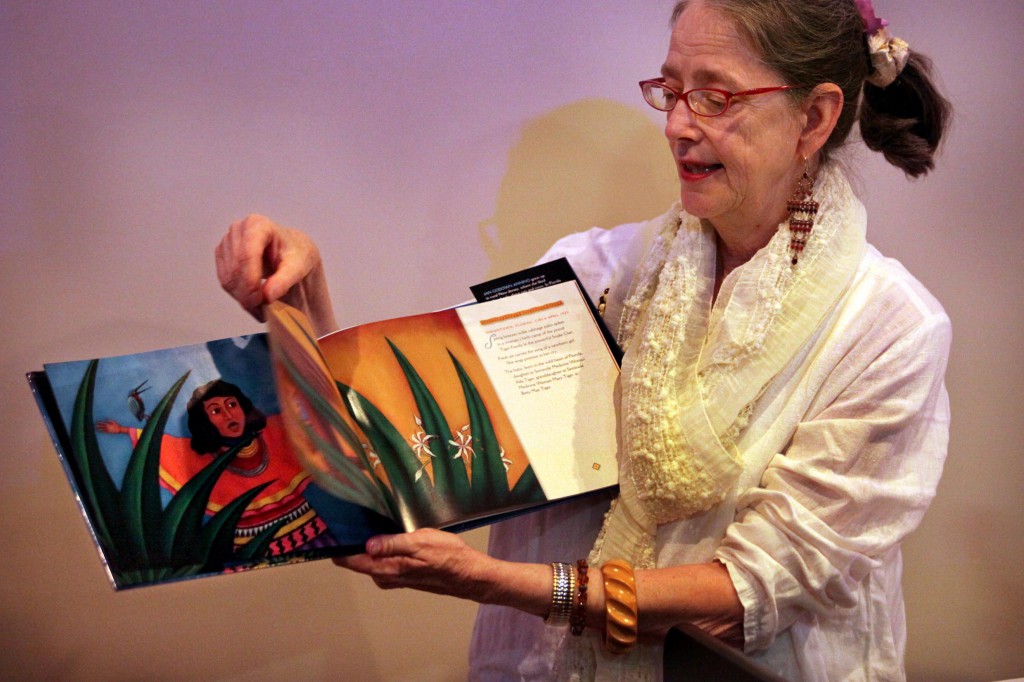 The program offered the deal of the year for history and cultural museum buffs:  Be a member of one of 17 participating attractions and have the opportunity to visit them all, absolutely free for one month.

“We always wanted to see the Seminole Museum. This was our perfect opportunity,” said Toby Srebnick, who showed up from Coral Springs with his family for the first of two Ah-Tah-Thi-Ki Museum BAMM events.

Visitors were fascinated by Samuels’ retelling of ageless stories handed down through generations and how deeply rooted storytelling is in Seminole culture.

“Storytelling revolved around the campfire when there was no electricity and our people were surrounded by water – we were out there in the Everglades,” Samuels said. “At night, the only light was the Seminole campfires that burned 24/7.”

Before children were sent to bed in sleeping chickees, family elders told the ancient stories to teach values and beliefs. Even today, the legends are told in the same manner to ensure the lessons stay the same.

Annino’s book, published with the Tribe’s blessing, celebrates the life of one of the Tribe’s most beloved storytellers, Betty Mae Jumper. Though written for children, the book immortalizes the true battles, heartbreaks and ultimate success of the often ostracized “half-breed” girl who became the Tribe’s first high school graduate, a nurse, a pioneer of the  Health, Education and Communications departments and the only woman in Seminole history to be elected Chairwoman.

“The first time I visited the Museum, it gave me goosebumps,” said Annino, a former journalist who through several decades became friends with Jumper. “Now, to be standing here to tell the story about one of the most revered women in Seminole and American history is a huge honor.”

The exhibit, which highlights a collection of photographs of Seminoles commissioned by the American Museum of Natural History in New York in 1910, runs through Dec. 9.

Srebnick, a full-fledged member of the Boca Raton Children’s Museum, said he, his wife, Sarah, and children Bailey, 9, and Riley, 5, love to visit history museums.

“Next we’re going to Bonnet House (Museum & Gardens) and the (Historic) Stranahan House (Museum) in Fort Lauderdale but we’ll definitely come back to the Ah-Tah-Thi-Ki,” he said.