WASHINGTON – About 200 Native Americans stepped into history July 15 as they completed the final leg of The Longest Walk 5, which began in California in February. The purpose of the 3,600-mile journey was to find cultural and spiritual solutions to the epidemic of drug abuse and domestic violence prevalent in Indian Country.

Led by American Indian Movement founder Dennis Banks, the group carried flags on its walk from Arlington National Cemetery, across the Potomac River on the Arlington Memorial Bridge and to the Lincoln Memorial in Washington, D.C., where speakers, singers, dancers and drummers filled the daylong program dubbed “Visions- A Call to Action” to raise awareness of the issues facing Native Americans.

“We went to find out how deep we are involved in drugs,” Banks said. “I thought 50 percent of Native Americans used street and prescription drugs, but it’s much higher.”

Across the country, Banks and the walkers met with tribal communities to gather information and share ideas about battling addiction and domestic abuse. They used a survey developed by Penn State University to collect data. The goal is to combine cultural and spiritual aspects of Native American life with techniques used in mainstream recovery programs to create a successful model for recovery.

“We listened to people and we have more hard data than they do in Washington, D.C.,” Banks said. “We have the answers; they are in our sweat houses, drum circles, long houses. This walk is a voice for people who need to be heard. The giving up stops here, let’s not be that generation that gave up. Never give up, never give in.”

The crowd on the steps of the Lincoln Memorial chanted loudly along with Banks, filling the area with their shouts. Seminole citizens and members of We Do Recover Charlie Tiger, Kenny Tommie, Christopher Billie and Arnie Gore, who met with the group in Big Cypress in June, walked the final mile and a half across the Potomac.

“It is very spiritual to participate,” Tiger said. “The message is powerful and true. This is a piece of the solution for everyone. Doing something like this, we realize we are useful and worthy and can help.”

Billie carried the Seminole flag as the group walked into the District of Columbia.

“It was a great honor to carry the tribal flag and represent We Do Recover here in D.C.,” he said. “This wouldn’t be possible if we weren’t in recovery. This is a great day.”

Native Americans from all over the country took part in the walk; some for a few hours, some for weeks at a time and a core group did the entire walk. Danny Cox, 21, of the San Pasqual Band of Mission Indians in California, joined the walk in Atlanta in mid-June.

“I felt I needed to walk not just for my people but for all people,” he said. “I thought I’d be homesick, but instead I found unconditional love. This is like a family. When I get home, I’ll tell my people that drug abuse is all over and not just on reservations. Love is the key; freely forgive and love unconditionally.”

Bobby Wallace served as emcee at the rally, but he also had an important role behind the scenes as fundraising coordinator, one of the walk organizers and spokesman for the group.

“This is historic and I hope it will grab the eyes of communities around the country,” said Wallace, of the Barona Band of Mission Indians in California. “No one has done anything of this caliber for drug and substance abuse. We are sending a message of togetherness. Maybe it is the Native community that will bring out ideas that will change things. It may take 100 years. Change affects a few at a time but with time, it will be a million people.”

As the group walked through communities nationwide, they presented a sight not often seen in some areas, Wallace said. They carried tribal flags and traditional tribal staffs bedecked with feathers and the name of the American Indian Movement and weren’t always well received.

“My bandana is off to everyone who walked, they are unique and special,” he said. “These people are doing something selfless and it takes strength to stand up and make a change for a better future.”

During the event at the Lincoln Memorial, many presenters spoke about substance and domestic abuse, which was added to the theme for the Longest Walk after Banks’ lost his granddaughter to domestic violence in October.

“Let’s stand up, let’s be strong,” said Shelia Hansen, of the Shenandoah Valley Shawnee Tribe in Virginia, with her fist raised high. “This is a fight, this is a battle, this is a war. It’s about our Seventh Generation and hope.”

Despite temperatures in the high 90s, sage was burned throughout the day and interest in the event remained steady. Tourists came to pose for photos at the reflecting pool and stayed to listen and look at the artwork displayed on the steps with messages such as “Break the silence”, “Reclaiming our sacredness”, “Everybody has a right to be protected.” A large teepee was set up on the site next to a message in red wooden letters that stated “We are still here.”

Kid Valance, the run captain for the walk and a musician, entertained the crowd with the theme song he wrote for the occasion, “To Be Here (A Blessing),” in which he sang “every step is a prayer, every mile a ceremony.”

In the early morning, as the group met at Arlington National Cemetery, Banks put the event into perspective before they took the final steps.

“I want you to understand how powerful you really are,” he said. “Remember those who perished during forced marches and those whose lives were taken. We walk for them; they’re watching us. We made it because we never gave up on our traditions and ceremonies. We will never abandon those ways of life.” 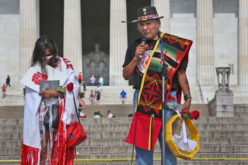 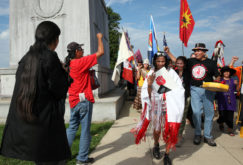 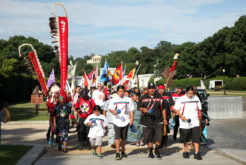 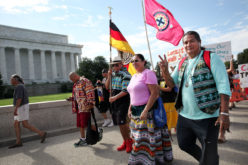 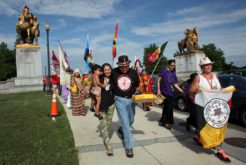 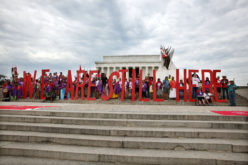 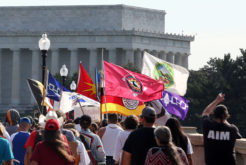 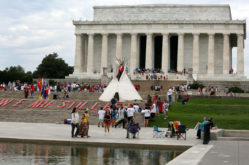