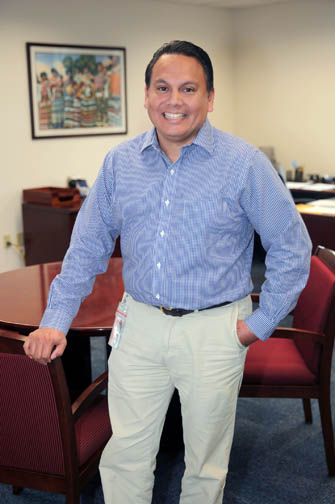 Lee Zepeda, a former teacher and principal at Ahfachkee School, was recently tapped to serve as Education Department director as the new school year began.

“This was a huge opportunity to step back into education again,” Zepeda said. “It’s an opportunity to refocus the department and remind ourselves we are supposed to encourage students and equip them with what they need to be successful.”

Shortly after graduating from Stetson University in 1993, Zepeda joined the faculty at Ahfachkee, where he taught for five years before being promoted to lead the school. He served as principal for five more years before joining the Tribe’s Human Resources Department as chief executive officer in 2005. In 2010, Zepeda left to spend time with his family and pursue a master’s degree in biblical studies from Liberty University.

Zepeda plans to bring stability to the department by filling open positions with employees who will build relationships with students and get to know them personally.

“We need to find out what the students like and don’t like, so we can guide them based on their interests,” Zepeda said. “The only way to do that is by getting to know them well. The students aren’t just numbers; they are actual people.”

“The possibilities are wide open,” he said. “When students are successful, the Tribe is successful.”

As a parent of a 16-year-old son, Nick, Zepeda has interacted with the Education Department for years. To prepare for the challenges facing the department, he has been meeting with Parent Advisory Committees on each reservation to learn what issues are important to parents and to gain their trust.

“Students bring everything to us,” Zepeda said. “We don’t have anything without them. We need to help them accomplish what they want to. We can make this happen. It’s entirely possible.”

Zepeda believes the department exists to help move students forward. He plans to accomplish this by returning to basics and providing students with skills they can use to succeed. He doesn’t believe in looking backward – only to the future.

“It’s hard to drive forward if you’re only looking in the rearview mirror,” he said. “For children, the world is wide open to them and they believe they can do anything. As we get older, we limit ourselves and let other people limit us. But for them, the world is open to any possibility.”