Skip to content
You are here
Home > Sports > Justin Motlow: First Seminole to play for FSU 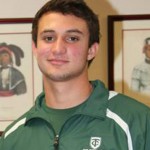 TAMPA — For the past three years, he was one of the country’s top high school wide receivers and punters. Now, standout Tampa Catholic football star Justin Motlow has accepted a preferred walk-on spot with the defending national champion Florida State University football team, making him the first Seminole Tribal member to play for the Seminoles of FSU.

The preferred walk-on status promises him one of 105 spots on next season’s team.

“He would definitely be the first one,” said Moses Jumper, the Tribe’s retired Recreation director and a close observer of the Seminole athletic scene since the first Seminoles began attending college in the 1970s.

His success did not come without a bump in the road. Though his game statistics had been brilliant through his first three years, a separated shoulder “took him right off the radar,” said his father, Clarence Motlow.

“A lot of recruiters travel around during the spring practices looking for potential seniors they could recommend, and he wasn’t there,” he said. “There are a lot of kids out there, more than there are slots on the teams.”

The 5-foot-10-inch, 180-pound speedster, however, came back from the injury to top his previous year with 1,151 receiving yards and 10 touchdowns (also averaging over 40 yards per punt), leading his team to the state 3A semi-finals.

Even though he was not awarded a scholarship on national signing day, he was given two options – FSU or a similar offer from Wake Forest.

“We never really thought FSU would be calling because of his size. Justin didn’t either,” said his mother Lisa Motlow. “I think things happen for a reason. This will give him a real chance to go out there and show what he can do.”