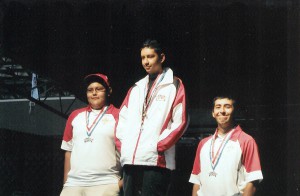 IMMOKALEE — The marquee in front of Immokalee High School read “Congrats Trey Boone Golf Regional” on the morning of Oct. 20. Immokalee Tribal citizen Johnny Boone III, known to everyone as Trey, had just earned the right to represent his school’s team, The Immokalee Indians, in the Golf Regional Finals being held at the Hideout Golf Club in Naples.

“Immokalee freshman Johnny Boone became the first Indian in years to advance to the Regional as an individual, shooting a 79 to tie for eighth overall,” said Naples Daily News reporter Greg Hardwig. “Boone is just the third boys player in school history to get to the Regional – Jerrod Carver in 2000 and 2001, and Matt Turcotte in 2005 were the others.”

A member of the Panther Clan, 15-year-old Trey is the son of Johnny Boone Jr. and Gale Motlow Boone. He is far from a newcomer to golf, having taken his first lessons at age 8. Showing remarkable promise, he competed in the U.S. Kids Tour in Scotland when he was 10, and most recently earned the Gold Medal in Golf at the 2011 Indigenous Games.

Boone’s record for the school season was 7-0 and he aced his position in the Regional lineup with the lowest score in school history with a 35 for 9 holes at the Valencia Golf Club.

Lely High School Coach David Johnson told the Daily News, “Immokalee looks like a great group of up and comers with a stunning performance by Boone.”

“I love golf and grab a club every chance I get; however, I didn’t get here alone,” Trey Boone said. “I owe a lot to my dad, Johnny Boone Jr.; Coach Tom O’Brien of the Rick Smith Golf Academy at Tiburon; Golf Professional Woody Doherty; and most importantly God, who gave me the talent. I plan to try very hard not to disappoint any of them.”