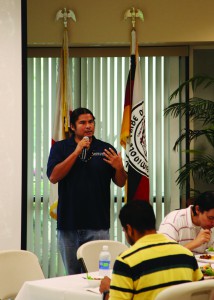 HOLLYWOOD — Tribal citizen Everett Osceola, Ah-Tah-Thi-Ki Museum community outreach specialist, shed light on one of the most important and controversial aspects of the Seminoles’ legacy in the latest Seminole Moments series presentation on Aug. 19.

The Tribal Headquarters Auditorium once again hosted the discussion for Tribal employees centering on the Indian Removal Act of 1830.

The May 28, 1830 law – passed by Congress and signed by President Andrew Jackson – called for the removal of Native Americans still residing east of the Mississippi River, relocating them to new homes west of the river.

The South strongly supported the act by an order to access lands occupied by what was termed the Five Civilized Tribes (the Cherokees, Chickasaws, Choctaws, Creeks and Seminoles). Amid pressure, many of the Native American leaders went on to sign removal treaties.

The first removal treaty to be signed after the act was the Treaty of Dancing Rabbit Creek in September 1830. With the treaty completed in 1831, the Choctaws of Mississippi ceded their land east of the Mississippi River in exchange for payment and lands in the West.

Osceola said that an estimated 75,000 Natives died throughout the removal, which also became known as the infamous Trail of Tears.

After the U.S. acquired Florida from Spain via the Adams-Onís Treaty of 1821, efforts were made for more than a decade to move the Seminoles of Florida onto suitable lands and assimilate them with the Creek Tribe as part of a meeting at Payne’s Landing on the Ocklawaha River beginning in 1832.

The Seminoles fought to keep their land and never formally signed a peace treaty with the U.S. government, which they are known for worldwide. The Tribe fought in the backdrop of the Everglades swamplands along with other groups, including African-American fugitive slaves (known as Gullahs) who escaped from coastal South Carolina and Georgia rice plantations.

The Seminoles’ fight also continued into the second and third Seminole Wars from 1835-55 with many of their brethren moving on and forced into Oklahoma, establishing what is now known as the Seminole Nation.

“Our Native people will never forget about such a tragic moment,” Osceola said. “Even though we had a tragic history we are still here. We all survived.”

Tribal employee Stephan Sanford said the presentation was both informative and interesting.

“I liked and enjoyed it. He (Everett) got in-depth, and it all came from a Seminole,” Sanford said. “He was affected by it. There were also feelings attached to it. It still resonates with them even with all of their success today.”