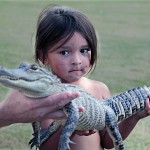 Hollywood residents took part in many of the same activities as the other communities and hatchet throwing, archery and hog chase.

“Indian Day is a day for the Tribe to relive past traditions, customs, beliefs, legends and, most especially, language,” said Paul Buster, Cultural language instructor. “It’s time for family, friends, fun and fellowship. But language is the most important part; it makes us who we are.”

Some Tribal members braved handling exotic creatures from Okalee Village, including a bearded dragon and a 4-year-old alligator. Although there was no wrestling, Buster spoke about the major role alligators play in Seminole history.

For hundreds of years, hunting alligators helped the Tribe survive by eating the meat, he said. In the process of catching the gators, the early Indians learned how to control them by using the same moves that entertain tourists today.

“Seminoles used to hide from soldiers in alligator dens,” said Buster, who isn’t sure whether this is legend or fact. “During the dry season, you can get in there and hide. We lived in harmony with them.”

Early Seminoles would also sell the alligators’ hides, but realized they would bring more money if they were alive. So they learned to wrestle the beasts, tie them up and then sell them. Eventually, people wanted to watch the wrestling portion of the transaction and a tourist attraction was born.

For Denise Billie, the event was a great way to remind Tribal youth of their heritage.

“Indian Day means we get to celebrate who we are and show our younger kids how we used to be,” Billie said. “Nowadays kids are more modern, but today they get to see how I grew up and are reminded they are Seminole, too. And it’s always good to get together with friends and family.”