VERO BEACH — The outstanding softball careers at American Heritage School for Ahnie Jumper and Kiauna Martin ended at Historic Dodgertown on a sunny, warm Saturday afternoon May 20 in Vero Beach.

The result of the final high school game for the two Seminole standouts – a 3-1 loss to Land O’Lakes in the Class 6A state championship – wasn’t exactly how they wanted the final chapter to be written, but the sting eventually wore off.

“We’re fine,” Jumper said five days after the loss. “You always want to win your senior year. We just couldn’t get it done.”

Jumper, a catcher, and Martin, an outfielder, compiled a remarkable streak of playing in four consecutive state championship games together, winning titles as freshmen in 2014 and juniors in 2016. Jumper actually finished with three state titles thanks to making the varsity squad as a seventh-grader in 2012 when the Patriots beat Belleview in the 5A final.

Jumper’s most memorable of the trio of titles came last season when American Heritage returned to the winner’s circle with a 12-2 win against Baker County.

“Last year stuck out for me because the year before we lost. A big part of that for me was a learning experience,” said Jumper, who will head to Fort Myers this fall as she joins Florida Gulf Coast University’s team.

Jumper and Martin’s days as teammates go back to youth softball when they first picked up bats and put on gloves.

“We started out together, and it’s been great playing with her. We both developed as players,” Jumper said.

“I’m going to miss my cousin,” said Martin, who hasn’t yet decided on a college. “I’m going to miss playing with her. Even when playing travel, I’m used to her being my catcher. When I’m out in the field and she’s not back there, I feel like part of me is missing. It’s not the same; it will never be the same.”

Being part of a successful program – American Heritage has won seven state titles (all with current coach Marty Cooper) – has its benefits.

“It’s developed me as a player. I’ve always had to play up against high caliber players,” Jumper said.

“It’s helped me grow a lot and learn a lot,” Martin said. “In travel you don’t really play with people three years older than you. I started as a ninth-grader playing with seniors and they were on me, so I learned fast.”

Their final game together nearly didn’t happen in the championship game. American Heritage’s graduation ceremony for its Class of 2017 just happened to coincide with the state title game nearly two hours away in Vero Beach, which meant a difficult decision for softball seniors: play with their team for a state title or walk with their class across the stage.

For Ahnie, the starting catcher, it was softball all the way, but for Martin, whose playing time was limited this season in often a substitute role, the decision was tougher. In fact, even after the team’s semifinal win against Ponte Vedra, she was undecided whether the next day she would put on a softball uniform or a cap and gown.

“At first I made a decision that I’m going to graduation, but then I’m all the way here already. I don’t know yet,” Martin said immediately after the semifinal.

The following day, Martin’s decision became known as No. 2 emerged with the rest of the Patriots while they walked between 50 or so Heritage fans who lined up before the game to cheer for the team as it walked to the field.

American Heritage’s road to the championship game included, as it usually does for one of the state’s most powerful programs, an impressive postseason run.

First, the Patriots walloped Archbishop McCarthy, 15-0, to win the 6A-District 15 title. Lopsided wins continued in regionals as American Heritage routed Goleman (15-0) and, behind Jumper’s 2-for-2 performance with a double and one RBI, Miami Springs (12-0).

In the final home game, Heritage continued its shutout string with a 3-0 win against Rockledge in a regional final. Jumper caught all seven innings of sophomore Julia Grobman’s no-hitter. Rockledge’s best scoring chance came in the opening inning when the Raiders had runners in scoring position with one out. Jumper helped prevent the runners from advancing when she sprung up and corralled a high fastball that appeared destined for the backstop. Grobman fanned the final two batters to end the threat. She finished with seven strikeouts.

Jumper hit the ball hard on a line drive out to right field in her first at-bat and she advanced runners on a sacrifice bunt in the sixth. Martin did not have any plate appearances, but the speedy senior, also playing in her final home game, stole second base as a courtesy runner in the fifth.

In the 11-3 state semifinal win against Ponte Vedra, Jumper and Martin helped put momentum on Heritage’s side by igniting a seven-run outburst in the third inning. Jumper led off by slicing an opposite field single between first and second. Martin pinch ran for Jumper and immediately became a factor with alert base running. When Hannah Sipos reached on a bunt, Martin took second and kept on running to third, which was left uncovered. Before the play was over, Martin helped draw a rundown that allowed Sipos to reach second and perhaps rattled Ponte Vedra. The next batter – Brooke Langston – reached on an error that brought home Martin and Sipos to give American Heritage a 3-0 cushion. Two more errors and a double by Sydney Grobman helped pad the lead.

American Heritage’s wealth of experience with four straight trips to state championship games and eight seniors figured to a huge advantage over Land O’Lakes, which was playing in its first state title game. However, Land O’Lakes sophomore lefty Callie Turner kept Patriot batters guessing and off balance all game on her way to tossing a five-hitter with eight strikeouts. Even in their second and third trips to the plate, American Heritage, which racked up a 25-4 record, struggled to make solid contact.

Despite a frustrating day at the plate, American Heritage took a 1-0 lead in the top of the sixth, but Land O’Lakes rallied with three runs in the bottom of the inning and went on to post a 3-1 victory.

Neither Jumper or Martin reached base in their final game. Jumper had a groundout and strikeout, and Martin, who pinch hit for Jumper in the fifth, was thrown out on a bunt attempt.
Final statistics for the season weren’t immediately available, but through the regional final, Jumper had a .488 batting average with six doubles, one triple, one home run and 20 RBIs. Martin batted .481 with eight hits, including one double, and three RBIs.

Replacing Jumper, Martin and six other seniors while maintaining its perch among the state’s elite will certainly be a challenge for next year’s squad. The program won’t be void of Seminoles, however. Budha Jumper was a substitute on this year’s varsity and others from the Tribe, including Ahnie’s sister Canaan, played for the junior varsity. 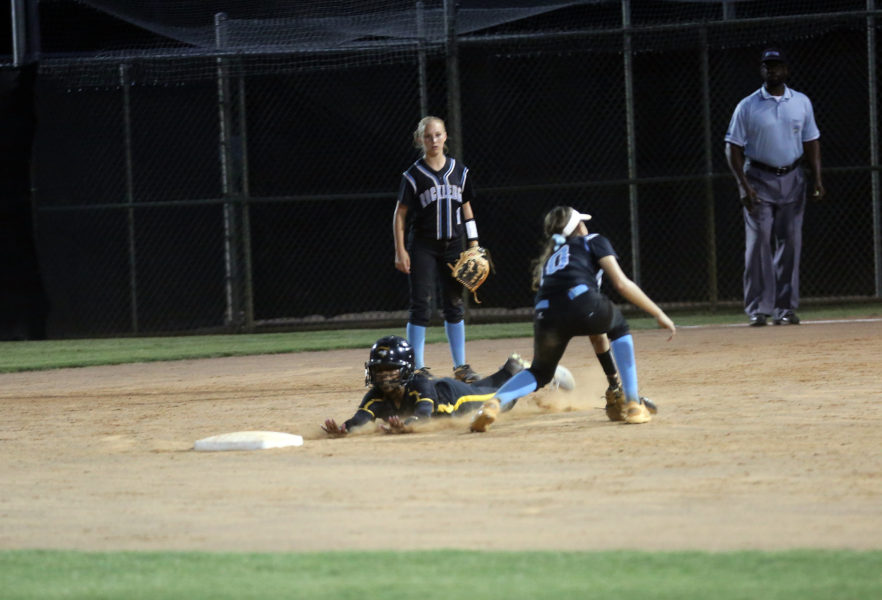 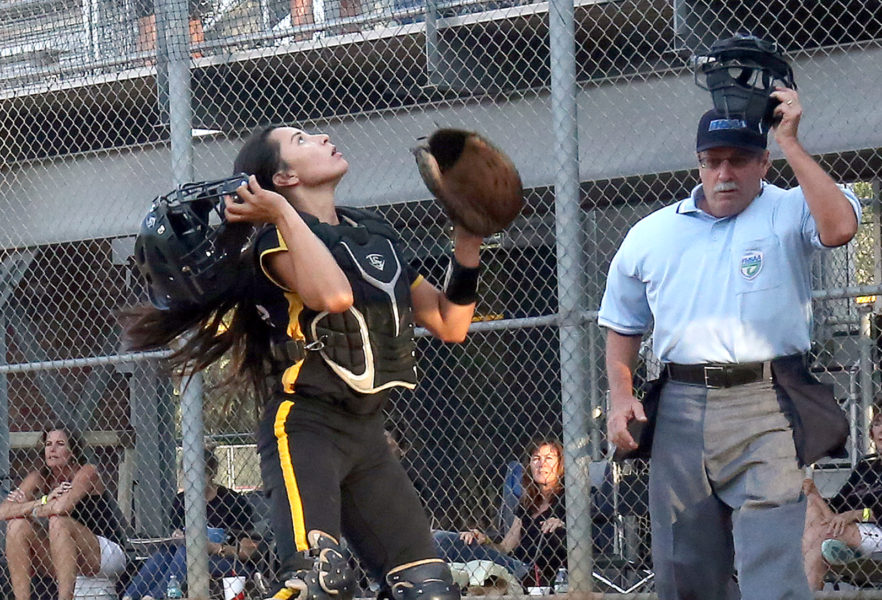 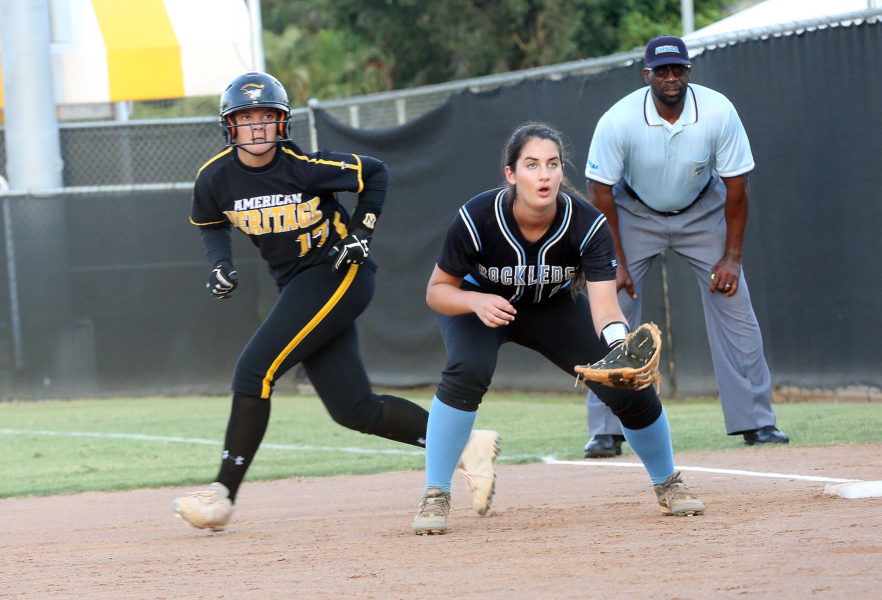 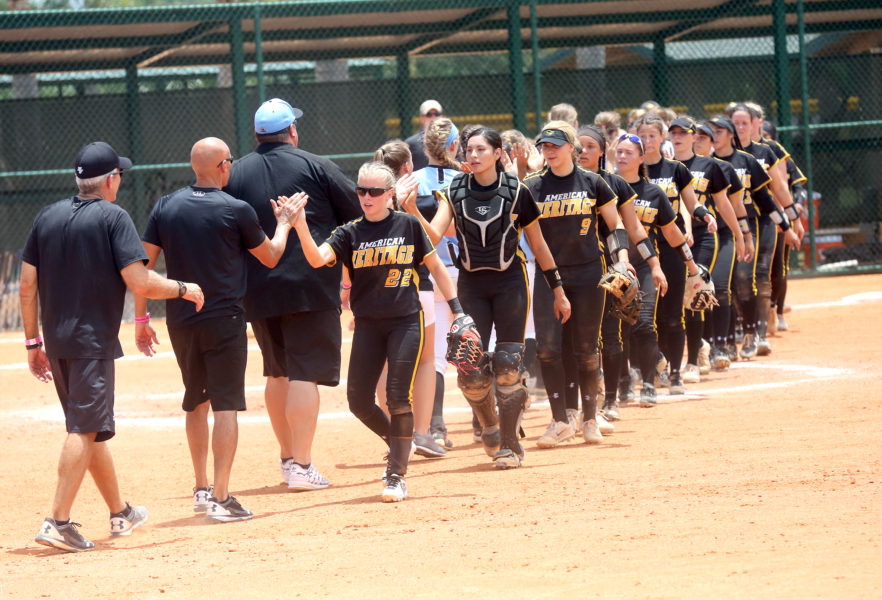 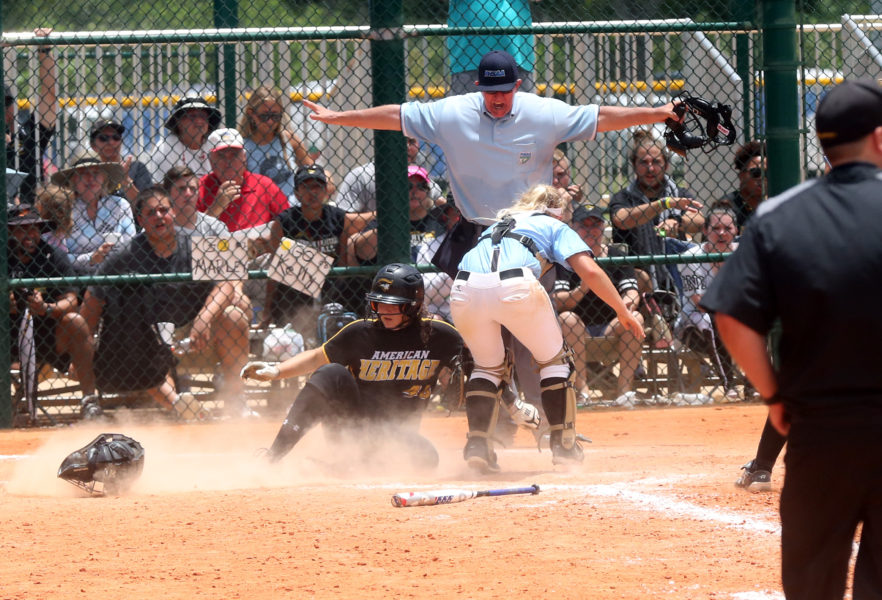 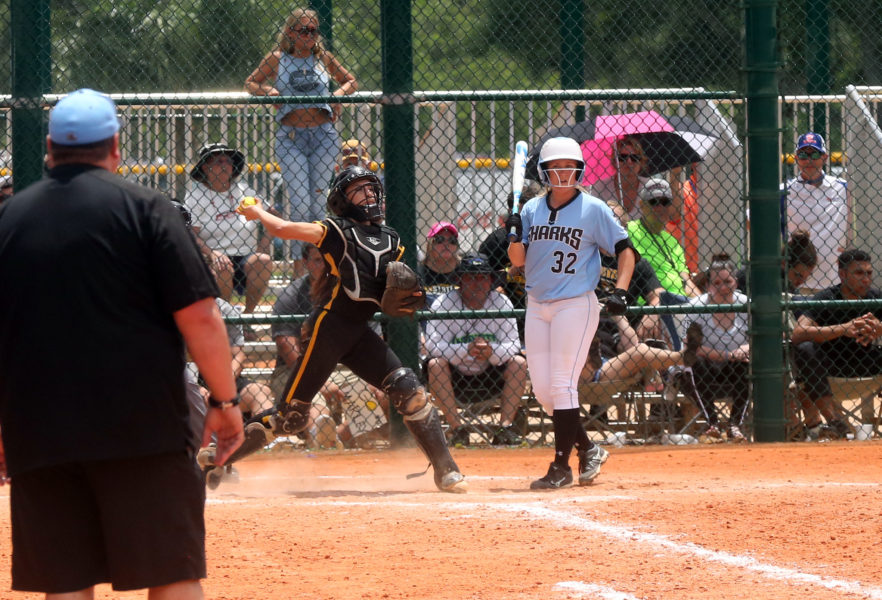 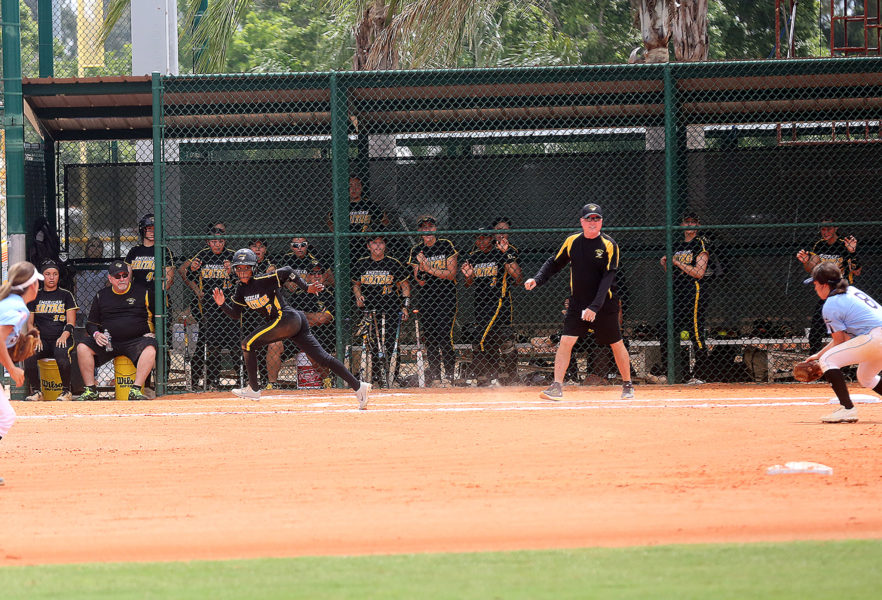 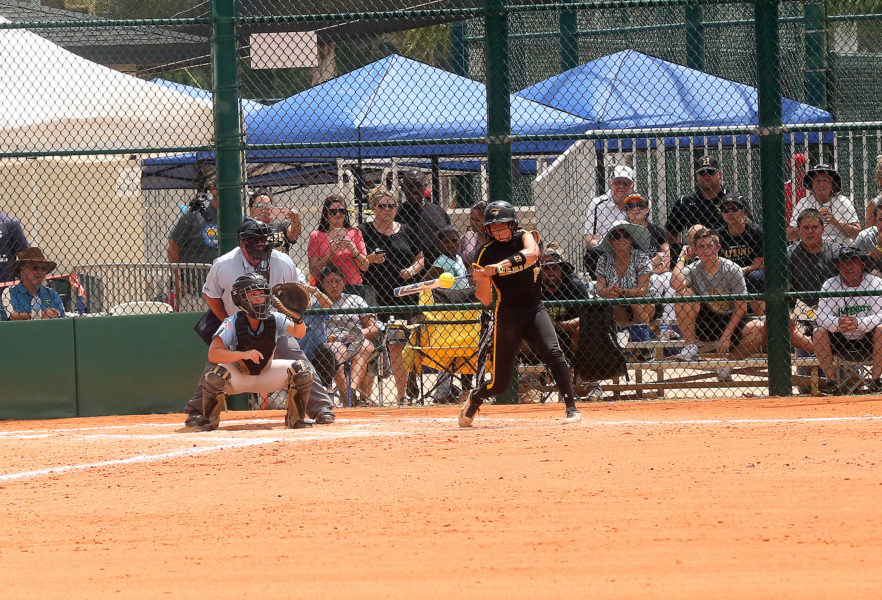 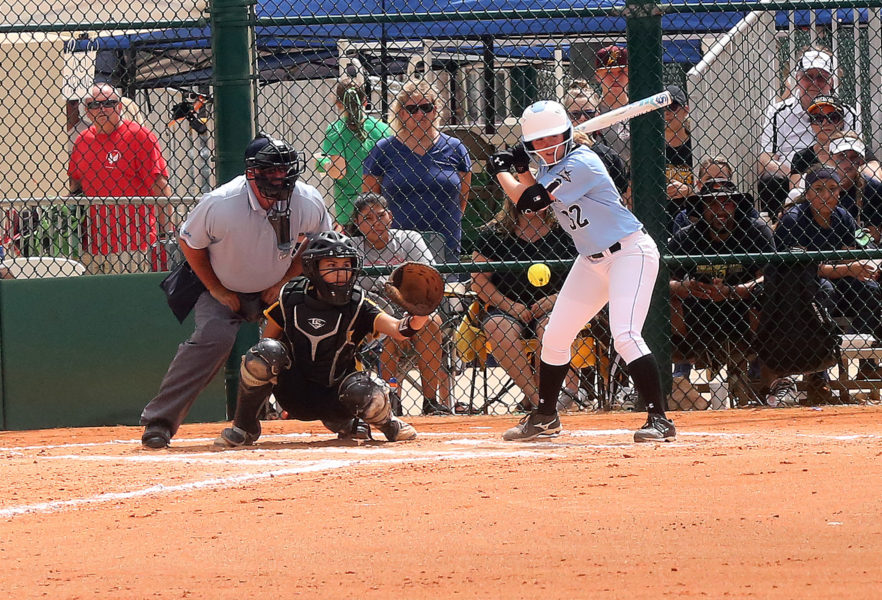 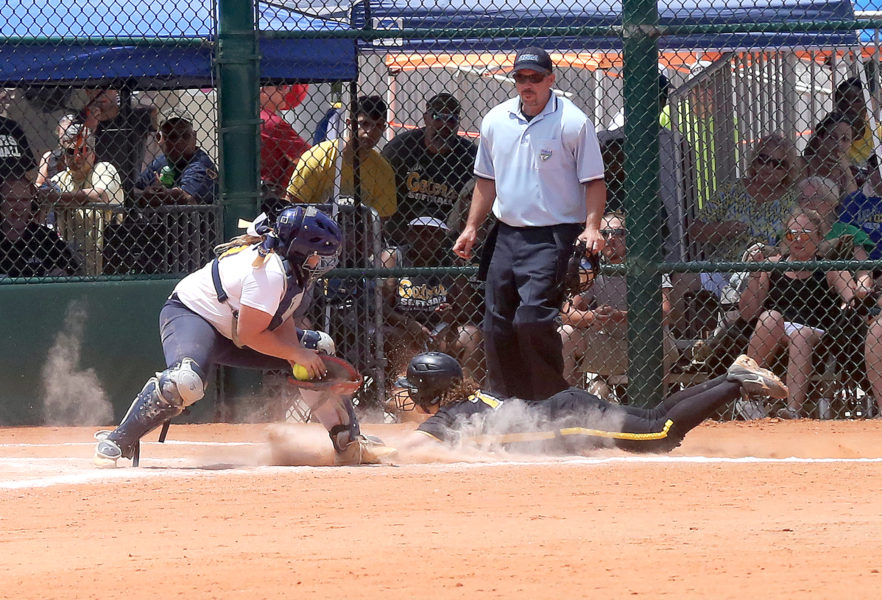 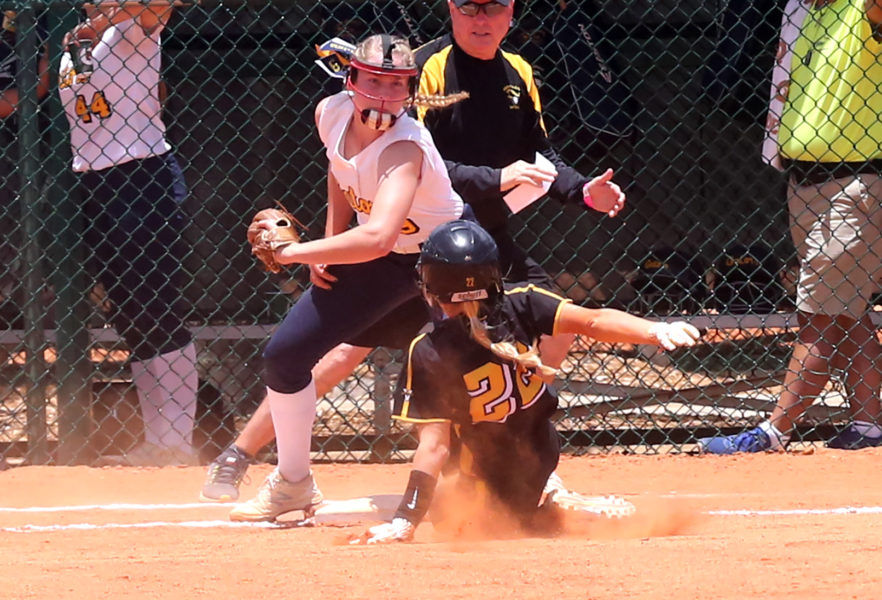 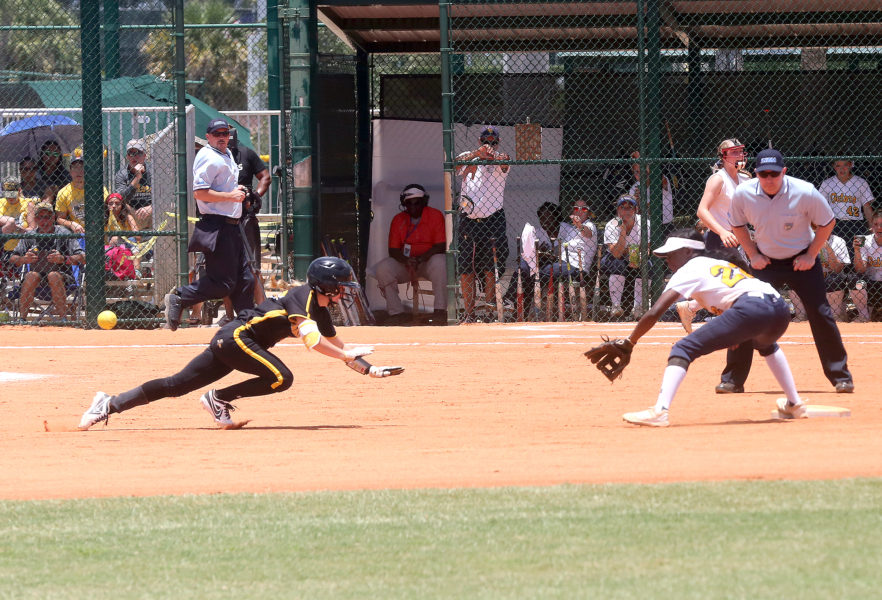 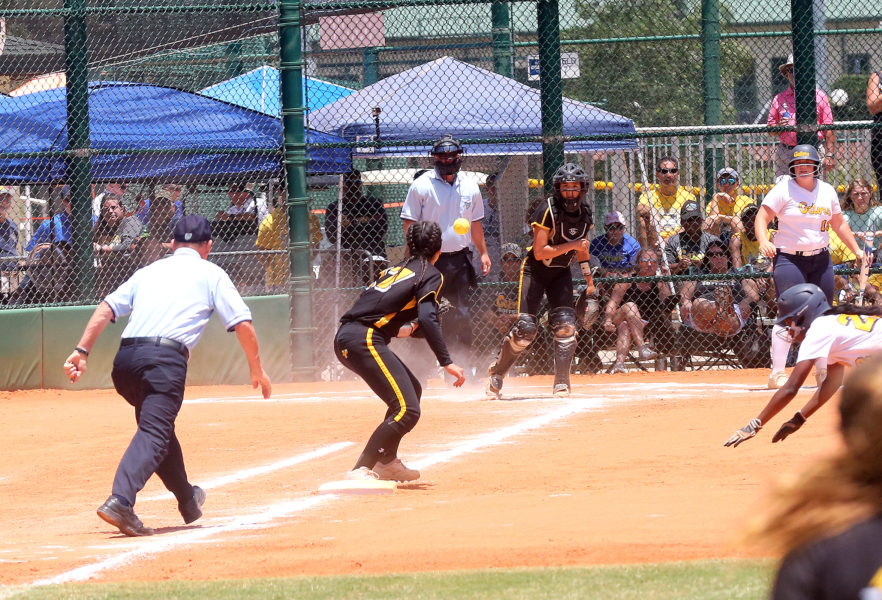 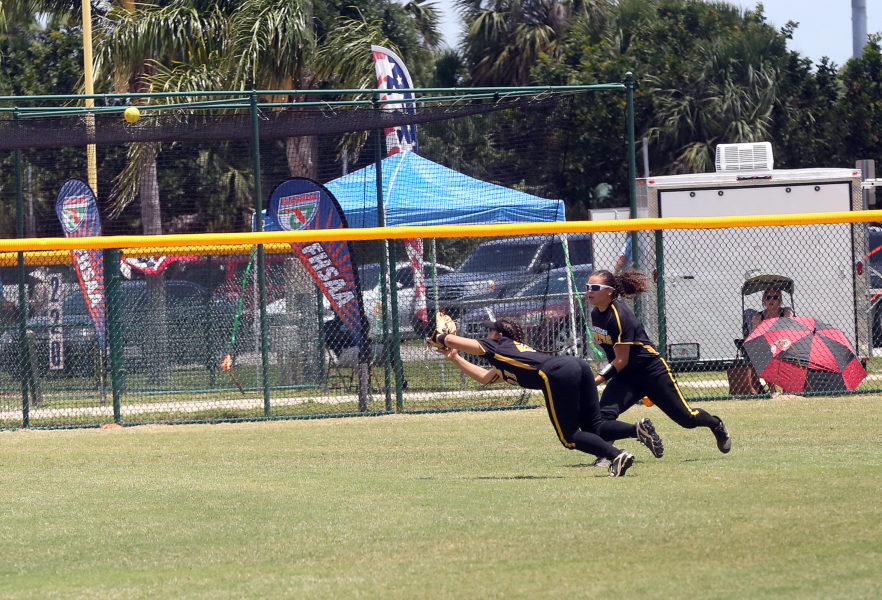 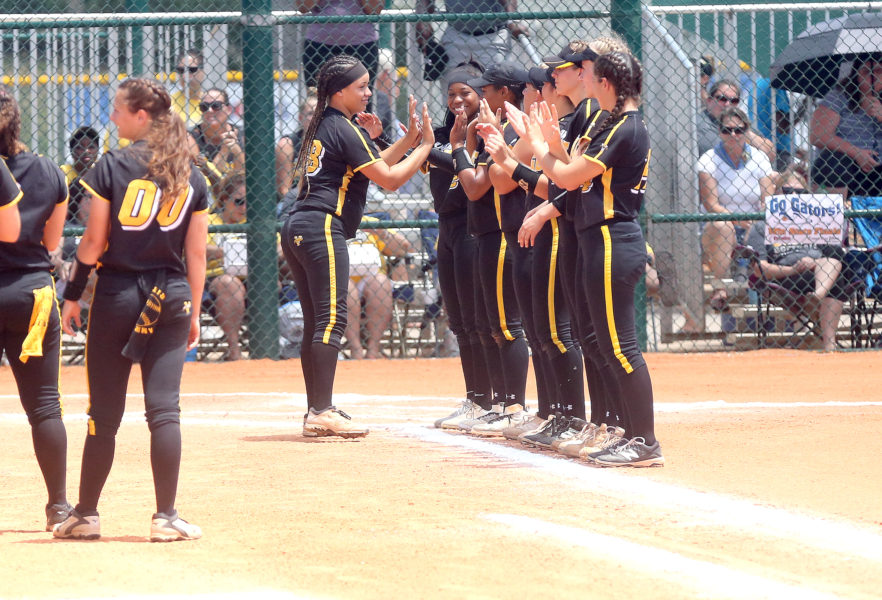