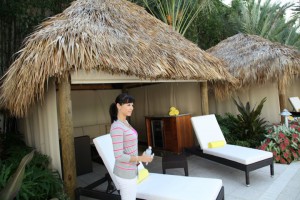 TAMPA — There’s something unusual about the new pool bar at the Seminole Hard Rock Hotel & Casino in Tampa. A huge window wall stretches behind the bar, emitting natural light onto patrons sitting inside at nearby gaming machines. Outside, sunlight bathes a tropical scene of palm trees and margaritas, people in bathing suits, some swimming in the pool, others resting in unique poolside chickee cabanas.

“What is unusual is being in a casino and also being able to see outside,” Hard Rock public relations manager Gina Morales said. “We are one of the only casinos in the world – Las Vegas, Asia, anywhere – that opens up and lets the outside in like this. It’s beautiful out there. We are in Florida. We embrace Florida in all ways.”

Also unique is the clock on the wall next to the new Rise Kitchen & Bakery.

“You don’t see many clocks in casinos either,” she said. “But we’re different – in a real good way. We’ve had a very positive reaction to our expansion…We are Florida’s ultimate entertainment destination.”

After a $75-million expansion, the Tampa Hard Rock now sports a casino floor that is larger than five football fields combined and features more than 5,000 slot machines, 110 table games and 50 poker tables. There is even an enclosed smoke-free slot room with 70 machines. A new restaurant (there are six on site), Rise, features American soups, salads, sweets and sandwiches made with 10 hearth ovens baking specialty artisan breads. The expansion also includes a new five-story, 1,300-space Winner’s Way parking garage.

“Those who wonder why we put in these changes should know that our patrons requested all this,” Morales said. “They have been asking for more space, more dining options and more parking.”

One of the largest employers in Tampa Bay, the Seminole Hard Rock Hotel & Casino pays more than $74 million annually in salaries and wages to local team members. The property employs more than 3,300 people, and the overall expansion project created nearly 1,000 jobs in construction and hospitality, two of the hardest hit job sectors in Florida. (Hillsborough County’s unemployment rate is currently 8.4 percent and remains higher than the national unemployment rate of 8.2 percent.)

The new addition, which increased the 200,000-square-foot casino/hotel complex another 32,000 square feet, includes a pedestrian walkway that features a moving sidewalk and museum-style displays depicting the history of the Seminole Indians along one wall and the history of rock ’n’ roll along the other. There is also a two-story wall filled with gold and platinum albums.

Hard Rock officials will now turn their attention to the rest of the complex, with plans to completely renovate much of the area, enhancing the tropical resort feel.

“It will be done in small increments so as not to disturb the business or the patrons,” Morales said. “Jim (Allen, Hard Rock CEO) wants to have it all complete by the end of December.”