Skip to content
You are here
Home > Community > Handle with care: Employees learn how to capture problematic pythons 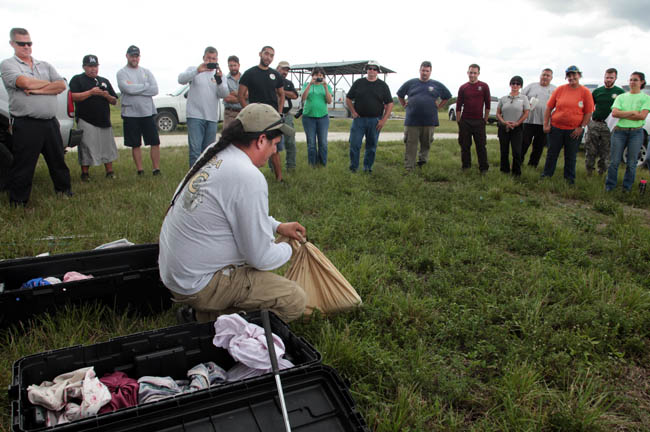 Because the large, invasive pythons have taken over areas of South Florida – most notably south of Tamiami Trail (U.S. 41), FWC is training people to identify and capture the dangerous creatures.

“The Python Patrol training is an early detection and rapid response program,” said Jenny Novak, FWC Python Patrol coordinator. “Eradication is impossible in extreme South Florida and they probably can’t live north of Lake Okeechobee. We don’t want them that far north and need to push them as far south as possible.”

According to an unpublished University of Florida study, the python population is moving west and north of Everglades National Park to the Naples and Fort Myers areas, as well as Broward and Palm Beach counties. FWC needs trained individuals to identify and catch the snakes and report the captures to the commission.

Burmese and Northern African pythons pose the biggest threats. Originally from Southeast Asia, where the climate is similar to South Florida, pythons lay between 40 and 100 eggs at a time. Their camouflage markings make them excellent hunters, and they can survive six months without eating.

“The snakes have been popular in the pet trade and pet owners may have been responsible for letting them go in remote areas,” Novak said. “It is against the law to let a snake go.”

The first wild python observations occurred in 1979 at the southernmost tip of the Everglades. Until 2001, there weren’t many sightings; however since then, for reasons unknown to the FWC, the population exploded. Sightings along U.S. 41 and other nearby roads are common.

During the training session, students learned to stay 15 feet away from a snake until ready to catch it. Novak cautioned against catching a snake in water or thick vegetation, noting the importance of seeing the entire snake.

“They are hard to see. Detection rates are very low,” Novak said. “Trained people know what to look for.”

The largest Burmese caught in South Florida was 18 feet, 8 inches, but they can grow up to 20 feet long. The Northern African python can also grow to 20 feet, dons irregular C-shaped patterns on its skin and often curls its tail like a cinnamon bun.

“We have a mile-and-a-half long boardwalk, and we see a lot of wildlife,” said Ken Bowers, Museum security guard. “I’m a reptile enthusiast and have seen a lot of snakes here, but no pythons. If I do see one, with this training, I’ll know what to do.”

Before the snake handling portion of the training, students were instructed to corral fleeing snakes by grabbing it by the tail from behind. If the snake acts aggressive and comes toward them, they were told to have a partner ready to distract the snake, then to get behind the snake, pin its head with the hook and put it into the bag.

The tools to catch these predators are simple: a snake hook and a pillowcase.

Students knelt on the ground with the snake so it couldn’t wrap around their necks or chests and suffocate them. They felt for the jaw and pinned the head right behind it to prevent it from turning and biting. By switching the snake’s head from one hand to the one with the bag, they could ease the bag over the snake’s head.

Python Patrol members and anyone else who finds a large, invasive snake are encouraged to collect data on the snakes, dead or alive. They should take photos, report the GPS coordinates or address for a live animal and call the FWC hotline, 888-IveGot1 (888-483-4681). For more information, visit www.ivegot1.org.