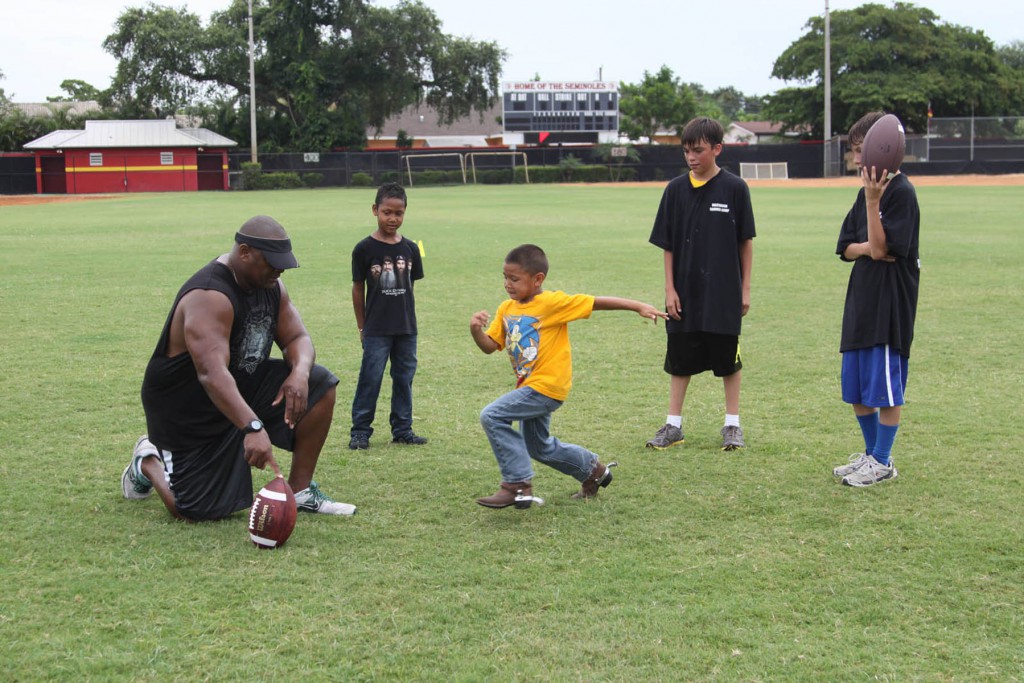 HOLLYWOOD — Despite threatening rain clouds, more than a dozen kids trekked to the Hollywood ball field July 8-10 for football camp. Leading the group to the gridiron was former NFL player Lorenzo White, an eight-year veteran running back for the Houston Oilers – now known as the Tennessee Titans – and the Cleveland Browns.

“I’m trying to help the Seminoles bring football back,” said White, who runs the Lorenzo White Foundation, a nonprofit organization that helps conduct football camps all over the country.

Butch Rolle, former tight end for the Buffalo Bills and the Arizona Cardinals, joined White for the football camp. Together, the coaches focused on teaching the fundamentals and proper techniques of the game. The children performed running drills by weaving in and out of cones, practiced throwing and catching, and learned how to punt.

Rolle thinks it’s important to keep children active during summer rather than let them be sedentary indoors.

“I try to preach to the kids that there’s more to life than video games,” he said.

Rolle strives to show them that being outside and experiencing the game is more beneficial than playing it on a screen. It helps them understand the game better and promotes healthy minds and bodies.

Whether out on the field or inside the gym because of rain, the children had a blast – evident by the wide smiles on their faces. White and Rolle peppered fun physical activities with inspirational pep talks.

For more information about activities available for youth, call the Recreation Department at 954-989-9457.