When Elgin Jumper arrived at the Loxahatchee battlefield in Jupiter to paint a giant live oak tree that is known as the Tree of Tears, he not only saw the object he would paint, but felt it, too.

“I got these kind of spiritual feelings from it,” Jumper said. “I started painting and everything got real quiet. I heard the breezes going through the top of the trees. It was like [the battle] was taking place in the top of the trees while I was painting. It was sort of a surreal experience.”

With a small crowd gathered around him at Loxahatchee River Battlefield Park, Jumper started a four-hour oil painting session in front of the 300-year-old living witness to key parts of Seminole history as the warriors battled the U.S. military in the Second Seminole War nearly 180 years ago.

Jumper’s experience at the battlefield earlier this summer was just the first in a series of paintings he wants to do at Florida battlefields and historic sites, including Loxahatchee, Okeechobee, Dade, Ocala, St. Augustine and others.

“I had always wanted to do something at the historical sites in Florida. That’s always been a dream of mine,” said Jumper, 52, who started painting when he was 40 and has enjoyed every moment. “I never regret getting into painting. It’s really changed my life.”

From the historical perspective, Jumper said he was fortunate to meet Andrew Foster from the Loxahatchee Battlefield Preservationists during a presentation Jumper gave in Fort Lauderdale. The meeting led to Jumper being invited to paint at the battlefield and to be part of an upcoming battlefield reenactment.

“We should tell these stories so that the Seminoles or non-Seminoles later on are told about these things that happened, these battles,” said Jumper, who painted both the tree and, in a separate piece, an area by the Loxahatchee River where he said Seminoles, who were trying to avoid being placed on the Trail of Tears, launched an attack on the military.

In August, Jumper reached his next historic site plateau when he painted the Castillo de San Marcos in St. Augustine during an annual Seminole War commemoration event. He said his finished paintings of historic sites will likely accompany him and his assistant Stephanie Sneed to presentations and exhibits. Sneed helps Jumper with setting up and documenting what he paints.

Sneed’s mother, Nilda Comas, a renowned master sculptor, is part of an impressive trio of artists – which also includes Jimmy Osceola and the late Guy LaBree – who have helped Jumper develop his painting skills.

“I’ve been pretty lucky on my teachers,” Jumper said. “They gave me of their time freely and never asked anything in return. That stayed with me, so if I can get an opportunity to go back and share what I’ve learned with emerging, aspiring artists, I’d be there.”

Jumper said painting the Loxahatchee battlefield has been beneficial to him in more ways than one.

“It’s been gratifying and memorable and profound,” he said. “I really didn’t expect that going into it.” 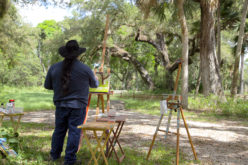