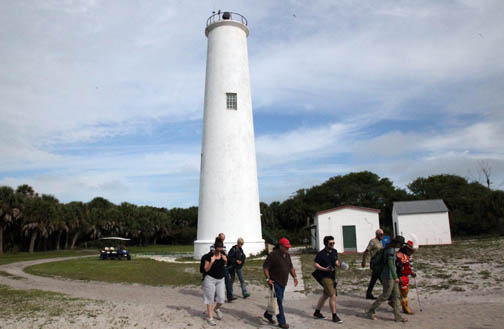 EGMONT KEY — A boat trip organized by the Seminole Tribe gathered together most of the entities important to saving erosion-wracked Egmont Key. The March 25 voyage included a guided tour of the island and a brainstorming session among 18 persons with interest or key roles in preserving the little endangered atoll at the mouth of Tampa Bay.

The group was welcomed aboard the Friendly Fisherman at Fort Desoto by Capt. Mark Hubbard. About two years ago, Capt. Hubbard guided the Gulf deepsea fishing boat loaded with Seminoles from Egmont Key to St. Mark’s in the Florida panhandle – a re-creation of the mid-1800s trips taken by the government steam vessel Grey Cloud that hauled deported Indians to join other exiled southeastern Indians on the “Trail of Tears” to Oklahoma during the Seminole Wars.

On one voyage, Seminole Polly Parker escaped when the boat reached St. Mark’s in the Florida panhandle. The boat had stopped to pick up wood for the journey up the Mississsippi River.

Parker and others walked and canoed back to the Okeechobee area and were never recaptured. Egmont Key’s history with Seminoles includes bodies buried in a marked graveyard and, experts suspect, in unmarked graves elsewhere on the island.

“If we lose Egmont Key, we may lose this part of our history. Few people know about it, as it is,” said Willie Johns, a Seminole Tribe historian and Chief Justice. “It may be a dark history – this was our holocaust – but it is still important to remember. We must never forget what happened to our people here.”

During the late-March trip, voyagers were shown the results of recent sand replacement efforts by the U.S. Army Corps of Engineers. Egmont Key’s northern beach area now extends an estimated 50 to 75 yards farther as a result of nearly 600,000 cubic yards of sand dumped there by the Corps in recent months. Erosion has claimed more than 50 percent of the almost 400 acres of the island’s 580 acres since the 1970s. A combination of global warming, wave action from supertankers passing nearby through the deepwater Tampa Bay shipping channel and the occasional violent storm are blamed for most of the devastation.

The new sand is temporary, as was sand dumped there and on other parts of the island several times during channel re-dredgings since 2000.

“When Mother Nature wants it she’ll take it. That could be in a year or decade. It could be next week if a big enough storm hits,” said Egmont Key ranger Tom Watson, marking the former 4-foot cliff edge of the beach (now in the middle of the new beach) that used to mark the island’s northern tip.

In an attempt for a permanent solution, the Army Corps has applied to grab $38.6 million from penalties paid in connection with the Deepwater Horizon oil spill to build an underwater support structure. The metal sheet piling wall would preserve future sand renourishment and add an estimated 39 acres of “permanent” coastal habitat. The U.S. Treasury is reviewing the application for emergency funding.

Beau Williams, of AquaTech Eco Consultants, discussed another suggestion which is now in use to fight erosion at the Richard T. Paul Alafia Bank Bird Sanctuary. He feels it is better than the “wall.” He said placing wave-attenuation devices – concrete pyramids pierced with holes – in the bay is a more advanced idea.

“They lessen both the wave’s power and the ability of the tides to pull sand away from the island,” Williams said. “We can build the beach as far back as we want; that’s the benefit of these instead of installing a wall that would be there forever or until it breaks apart.”

Williams has been assured the Corps will consider his recommendations.

Wildlife is also a key component of the island. Ranger Watson pointed out that Egmont Key is home to more than 30,000 pairs of birds and 1,800 gopher tortoises. He said last season 54 loggerhead sea turtle nests holding up to 100 eggs apiece were recorded.

From the late 1800s through early 1900s, Egmont Key was home to Fort Dade, where the U.S. military protected the Tampa Bay area during the Spanish-American War. The fort housed a town of more than 300 and included brick roads, a railroad and 70 buildings, including a bowling alley, but most everything is gone now. Built in 1847, the lighthouse still stands as a working beam, operated by the U.S. Coast Guard.

A report on the meeting was broadcast nationwide by National Public Radio. A reporter and a photographer from the Tampa Tribune also covered the meeting.

“It is amazing how much media and government attention this project is getting now, after languishing all these years,” said Ah-Tah-Thi-Ki Museum Director Paul Backhouse, whose staff organized the meeting. “The more we can do to keep this project in the public eye, the better chance we’ll have of seeing the island saved.”

During the meeting, Backhouse described several tribal projects, including public information and attention grant applications with the National Park Service and the National Trust for Historic Preservation. Backhouse said he thinks the Tribe has a good chance of getting them.

“It is appropriate that the Seminole Tribe is the driving force behind (Egmont Key restoration),” said Mary Glowacki, Florida’s state archaeologist. “History and culture play a very important role in preserving sites such as Egmont Key.”

Backhouse said he met with the Alliance for Integrated Spatial Technologies on the University of South Florida campus.

“They probably have one of the most advanced archaeological visualization labs in the world. Coincidentally, they really want to work on Egmont Key,” Backhouse said. “We agreed to begin discussion on an interdisciplinary program that will focus on expanding knowledge of the island in a number of directions, including allowing tribal school groups to get exposure to the history through hi-tech laser scanning and non-invasive geophysical techniques like ground penetrating radar. We will be looking to seek a grant for this work so that it won’t ultimately encumber the Tribe in any way.”