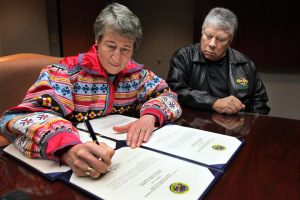 HOLLYWOOD — During a signing ceremony Jan. 8 at Tribal Headquarters in Hollywood, the Seminole Tribe of Florida became the 15th of 566 federally recognized Tribes to be approved by the U.S. Department of the Interior for autonomy over tribal leasing agreements on trust lands.

“We have for years controlled a tremendous amount of what happens on tribal land,” Jewell said. “They now control that part of their future, we don’t – which is great.”

In effect, the move bolsters the Tribe’s sovereignty and releases the U.S. government’s involvement in Seminole Tribe of Florida commercial, residential and land investment development. It also enables the Tribe to streamline leasing to non-tribal businesses on reservations and utilize trust land for renewable energy projects.

“You’re on your own,” said Jewell as she handed over the signed documents to Chairman Billie.

Autonomy is granted to Tribes that submit land leasing regulations approved through their own government structure for businesses, residences, agriculture, education, recreation and religion. An environmental impact review is included.

But Jewell said turning over responsibility does not absolve the Interior Department of all oversight.

“The Tribe still has to do what is right by their people,” Jewell said.

Chairman Billie said the BIA, under the direction of the Interior Department, has “overshadowed” the interests of the Tribe since the 1800s. In the mid-1950s, when the Tribe was set to be “terminated” by the U.S. government, the Fort Lauderdale-based Friends of the Seminoles helped support the Tribe’s incorporation while the Tribe anchored itself in cattle, tourism and gaming businesses.

“In the modern-day scheme of moneymaking, we had a lot to learn,” Chairman Billie said.

Housing, traditionally in chickee camps, became a formality when the U.S. government wanted families to live in homes with addresses, especially for census data.

But, Chairman Billie said, after the tribal government would provide homesites for home ownership, it took the BIA months or even years to approve steps toward building.

“(The HEARTH Act) gives us the responsibility to make decisions and move quickly,” Chairman Billie said. “No more stumbling blocks.”

Jewell said the Act reinforces the federal government’s obligation to treaties made nationwide with Tribes throughout Indian Country and proves the government’s commitment to tribal sovereignty.

“This is a clear charge to all agencies to step up to treaty agreements and turn over responsibility to Tribes. They know their lands, their people and their needs better than anyone,” Jewell said.

When pressed on just how the Seminole Tribe plans to exercise the renewed land leasing rights, the Chairman declined to explain.