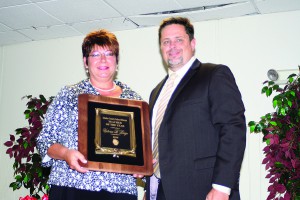 MOORE HAVEN — The Glades County School Board held its annual Golden Apple Banquet and Awards Ceremony on April 3 to honor the county’s outstanding teachers and support staff for the school year.

Victoria Paige, a second-grade teacher at Pemayetv Emahakv Charter School, took home top honors from the banquet, as she was recognized as the 2014 Glades County Teacher of the Year. This recognition is the highest achievement an educator can earn within her school district.

“Being named Teacher of the Year…has been a great honor,” Paige said of her nomination at PECS. “Knowing that the equally dedicated and highly professional individuals I work with supported my nomination was indeed a humbling experience.”

For more than 34 years, Paige has dedicated her career to the education of children, and her resume speaks for itself.

She was formerly named Teacher of the Year and Volunteer of the Year in Okeechobee County and also received the prestigious WPEC TV CBS12 Educator of Excellence Award in 2000. Paige praised her PECS family and her own family for their dedication and support of her career as an educator.

Paige is the second teacher from PECS who has received the Glades County Teacher of the Year Award.

PECS Middle School Teacher of the Year Quenten Pritchard and Support Staff Employee of the Year Linda Long were also recognized during the banquet for their educational achievements at PECS.

Current and former students, along with PECS principal Brian Greseth, had very encouraging and supportive words to share about all the honorees.

During the event, held at the Doyle Conner Building in Moore Haven, Pemayetv Emahakv Charter School was also recognized as a Golden Apple Sponsor for their continued support of the Golden Apple Banquet.