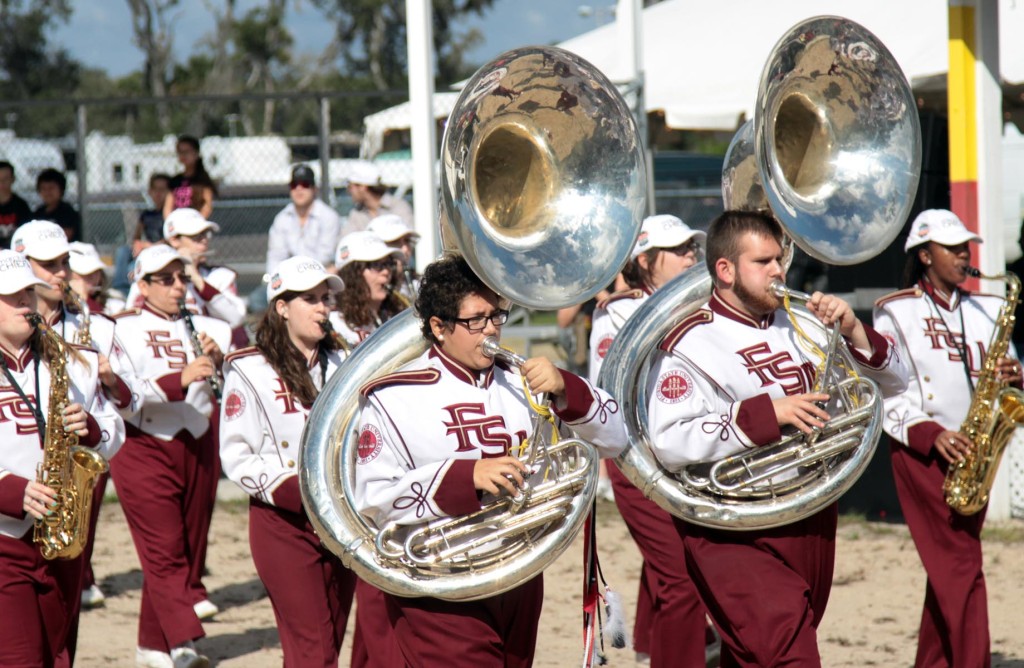 BRIGHTON — In its 76 years, Brighton Field Day has grown from less than 100 Tribal members gathering for friendly competition to a festival attracting thousands of visitors for carnival rides, a parade and cultural and wildlife shows.

And, with every year comes something new – this year the Tribe proudly welcomed 54 of the 400-member Florida State University Marching Chiefs band.

David Plack, marching band director, said when he announced the Brighton trip, students lined up for a chance to attend.

“They see it as an opportunity to learn about who they represent,” Plack said.

Allen Durham, who brought along the FSU pageantry Osceola and Renegade for the third consecutive year, agreed: “The Tribe’s support of FSU is a special thing.”

Other special guests of the Feb. 12-16 event included four national championship winning FSU football players, who are also NFL draft prospects, and the guys of the hit television show Duck Dynasty; both found similarity with the Tribe.

“I never knew much about the Seminole Indian Tribe but have learned a lot today and realized quickly we’re (the same) because on the seal it says, ‘In God we trust,’ and that’s what we’re all about,” said Justin Martin, of Duck Dynasty.

“It feels good to come out and know you’re part of another family,” said FSU running back Devonta Freeman.

As well as participating in the parade, the visitors tried their hands at traditional Field Day activities.

The Chiefs kicked off the rodeo with the national anthem, the football players took a stab at alligator wrestling and the Duck Dynasty men drummed along with the WISDOM Dancers.

Since former president Joe Dan Osceola opened the event to the public in the 1960s, Field Day has served as an opportunity to share Seminole culture with the rest of the world.

“Sometimes the outside community has a lot of misconceptions about us,” Norman “Skeeter” Bowers said. “By doing this every year, people can come and see we still have our culture.”

Traditional food cooked under a chickee, canoe carving and vendors selling arts and crafts provided a peak into Seminole history, but Field Day would not be complete without the activities that started it all.

Throughout the weeklong event, Tribal members of all ages participated in everything from bowling, golf and corn hole tournaments to log peeling, horse racing and skillet throw competitions.

The Fred Smith Rodeo Arena, named for the man who first incorporated rodeo into Field Day, rattled with excitement for the highly revered EIRA, PRCA, Bulls and Broncs and Xtreme Bulls rodeos.

“You have to love something like this to make it happen,” said Joe Dan Osceola, who was visiting the festival for the first time in years and was happy to see its progress.

Although Tribal members happily share their unique culture with visitors, Brighton Field Day remains above all things, a homecoming.

“For every Tribal member, it’s a chance to see people you haven’t crossed paths with in a long time,” President Sanchez said.