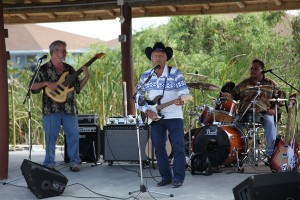 MIAMI — More than 50 Bird Clan members gathered at the Miccosukee Village on March 10 for a family reunion.

The group of Seminole and Miccosukee Indians hadn’t gathered together in more than 50 years and decided to reunite the clan once again.

“The whole theme is getting to know our clan,” said Virginia Osceola, who organized the event with sister Theresa C. Osceola. The day included Tribal speakers, live music, raffles and food.

The Bird Clan used to meet all the time, but modern day jobs, cars and houses have pulled them apart, said Virginia’s husband, Joe Dan Osceola.

“The meeting of clan gatherings were put on the back burner all this time,” said Joe Dan, the former President of the Tribe and a member of the Panther Clan. But his wife and her sister decided to make the gathering a priority. They spread the word, and Bird Clan members came from across the state for the reunion.

Linda Bowers drove in from her home in Big Cypress to attend.

“It’s something to be proud of to show who you are and where you’ve come from and meet your unknown relatives,” said Bowers, who was born at the Miccosukee Village and moved away at about 4.

Four of her grandchildren attended the reunion, as well as her daughter Clarissa. Her other children had to work, she said.

Bowers said events like this are critical reminders of the need to teach youth about their clan’s roots and family heritage.

Virginia Mitchell also came into town from Big Cypress to “hang out and see how everyone’s doing.”

“I’m close to my clan family,” said Mitchell, who was born in Hollywood and lived in Miccosukee Village until she was about 30. “I miss my clan family.”

Several elders addressed attendees in Mikasuki about their clan and its history, including Paul Bowers Sr., Pete Osceola Sr. and Andy Buster.

“The door is open for anyone to talk from the Bird Clan,” Pete said in Mikasuki. “I encourage people to talk.”

Sharing memories and stories of the past by word-of-mouth is critical to preserving the clan’s past, he said.

Before Buster spoke, he performed a mix of contemporary and traditional songs with his band, including the song Seminole Wind.

Raven Osceola helped her mom, Jolene Osceola-Tabares, and other family cook the meal.

“It’s nice knowing who your family is,” she said of the event.

Clan members said they feel hopeful that this event could become an annual tradition, and maybe other clans will follow suit.

“This one might inspire others,” Joe Dan said. “We don’t give up.”