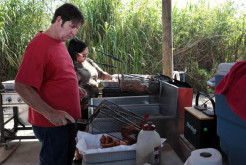 TRAIL — Jessie Jimmie had her first drink at age 12. Now suffering from cirrhosis of the liver at 30, she joined Seminoles in Recovery for help.

“I drank for six years straight,” said Jimmie, who has been sober since March. “I have only one choice; drink and die or don’t drink and stay alive. It’s kind of simple.”

“Living in sobriety is the message,” said Helene Buster, director of Family Services who coordinates Seminoles in Recovery events.

The day centered around recovery, but it also offered fellowship and fish. Eighty pounds of tilapia, grouper, bass, salmon and alligator tail were served up along with hush puppies, ribs, burgers and hot dogs. A horseshoe tournament and raffles for Miami Dolphins tickets, airboat rides and fishing equipment kept people hoping for a winner.

Attendees, many who had a story to tell and perhaps a demon or two to conquer, found support in the group. Some shared their experiences on the road to recovery during the Alcoholics Anonymous and Narcotics Anonymous meetings held during the event.

“I get a connection. I go home and feel alright; it’s like medicine,” one man said about his reason for attending meetings.

“Everything you do when you aren’t using is a stepping stone on the road to recovery,” said another.

Others took their turn sharing.

“I come here to hear the language of the heart.”

“I keep fighting my drug and alcohol problem. I thought it would be easy; it’s not. But I fight the demons.”

“Either we wake up now or we keep making the same mistakes over and over again.”

Ariana Cypress, 23, joined Seminoles in Recovery when she hit bottom in June. She struggles with drug addiction.

“I got tired of the way I was living and my insanity,” she said.

Cypress hallucinated when not on drugs, attempted suicide and felt emotionless. Once she decided to get clean, she made new sober friends. To maintain her sobriety, she calls her sponsor for support and attends meetings every day.

“I’m so emotional now,” Cypress said. “I have to feel the feelings. It’s a challenge, but it’s good to feel something whether it’s good or bad.”