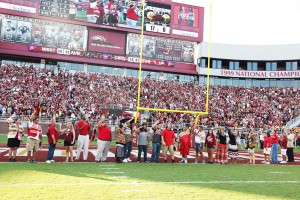 TALLAHASSEE — The standout moments keep coming for the Ahfachkee Warriors.

On Sept. 10 at Florida State University’s Doak Campbell Stadium in Tallahassee, athletes, coaches and support staff from the Tribal school’s athletic program received a standing ovation from a crowd of more than 80,000 people.

Immediately after the first quarter of the FSU-Charleston Southern college football game – an easy 62-10 win by the then-No. 5 nationally ranked Seminoles – members from the Ahfachkee Warriors athletic program walked out onto the field to wave to the crowd.

With the Osceola mascot and Renegade horse nearby, the Tribal athletes and their coaches soaked in the watershed moment, as they were all humbled by the thunderous applause they received for being Florida’s first-ever Tribal athletic program to complete a full season of operation.

In a revealing journal entry of the history-making occasion, several Tribal athletes and some of their coaches discussed what being an Ahfachkee Warrior meant to them.

“When I stepped onto the field with all my teammates and friends, it felt like we accomplished something and we were accepted,” Billie said. “It felt great for everyone at FSU to know who we are.”

Fellow Ahfachkee Warriors golf and boys’ basketball senior Taylor Pratt opened up about his reasons for the significance of the Tribal athletic program’s shining moment.

“I was glad that I got to see the FSU campus and the game,” Pratt said. “When I stepped on the field, it was one of the most awesome things I’ve ever experienced in my life. I wish I could wake up to this [the stadium cheers] every day.”

Meanwhile, Ahfachkee Warriors golf and boys’ basketball senior Ryan Cypress – who may consider FSU as a college choice after graduating next year – talked about what ran through his mind prior to the weekend’s signature moment.

“My very first feeling, before we actually stepped onto the field, would have to be nervous,” he said. “But then I thought of what I was actually doing and who I was representing. I just felt overwhelmed with joy and pride. As I took my first steps onto the field, I just couldn’t believe where I was at. It was my favorite part of the whole trip because there was so much going on; so many strong emotions. That excitement was just rushing through my veins. I didn’t want to step off the field.”

“The most overwhelming feeling I had was pride,” Stoots said. “I was proud of our athletes and the athletic program. I was proud to be standing next to Seminole students and to hear the crowd explode as they spoke of their accomplishments. I felt chills throughout my body as the announcer spoke about the Tribe. I am proud to be a part of a program that is making history.”

“On this day (Sept. 10), the resilient posterity of the Seminole Tribe of Florida was vindicated for past atrocities and systematic disenfranchisement against their ancestors and predecessors,” Wright said.

“Without pun, the playing field was leveled, thus justifying the fight for equality in all endeavors associated with the Tribe. Osceola and Renegade, though in mock form, served as a reminder of the undying relentlessness of the Seminole,” the Warriors boys basketball coach continued.

FSU President Eric Barron, who invited the Ahfachkee Warriors athletic program to his home for a pregame meal and pep rally, talked about his excitement for their fledgling entity.

“They’re off to a wonderful start,” Barron said. “I’m proud of what their future is going to be like. I’m hoping we’ll see them [the Tribal athletes] as FSU students someday. It feels great to have them at the house and to celebrate their success as a program. I can’t think of a better way to put the best foot forward at the university with the Seminoles here with us. “

Ahfachkee Warriors student activities coordinator Randall Cleckler spoke of how the trip signified a culmination of purpose, accomplishment and identity.

“It is up to our younger students to continue the program that this group of athletes started,” Cleckler said. “It took a lot of a hard work, courage, pride and a never-quit attitude that has made this program happen. These student-athletes deserve the same commitment to excel in this program and move on to the next level of competition.”

Cleckler went on to credit the Tribal leadership for making the moment possible for the entire Ahfachkee Warriors athletic program.

“It’s great to know that the Tribal leaders are willing to invest so much in the lives of our Ahfachkee students and athletes,” Cleckler said. “Their efforts in allowing events such as these are so monumental in the lives of our children. These experiences are life-long educational experiences that are tangible and can be used for the good in their lives forever.”