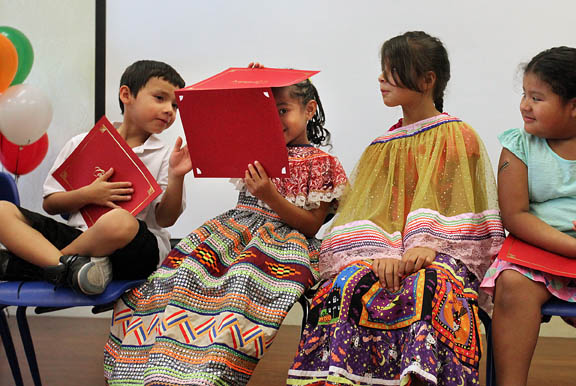 BIG CYPRESS — Prayers and pledges helped usher 13 of Ahfachkee School’s tiniest students into the next level of learning May 28 during the kindergarten Class of 2015 graduation.

“The book of Proverbs says we should train these children up the way they should go and when they are old they will not depart from it,” said the Rev. Salaw Hummingbird, of Big Cypress First Baptist Church.

But the grads, typical for most 5- and 6-year-olds, could barely sit still in chairs along the stage where their feet scarcely touched the floor. And when the school’s cafeteria manager delivered a three-tiered sheet cake decked with obviously delicious white and red frosting, several children pointed and giggled.

Each had spent the last year studying the alphabet and numbers up to 30. They learned elementary school etiquette like standing in line and raising hands to speak. The group served hours toiling in the traditional garden and learned enough language of the ancestors to sing the “Chee-han-taa-mo” song to family members.

When the children rose to their feet and sung with gusto “I am a Promise,” the audience knew it was true.

“I can climb mountains … I am a possibility … I am a promise with a capital ‘P,’” they sung as loud as they could.

After speeches and more songs, students received certificates of completion and then proudly displayed them.

“The children worked really hard and we are so proud of them,” said acting principal Jillian Wilson.