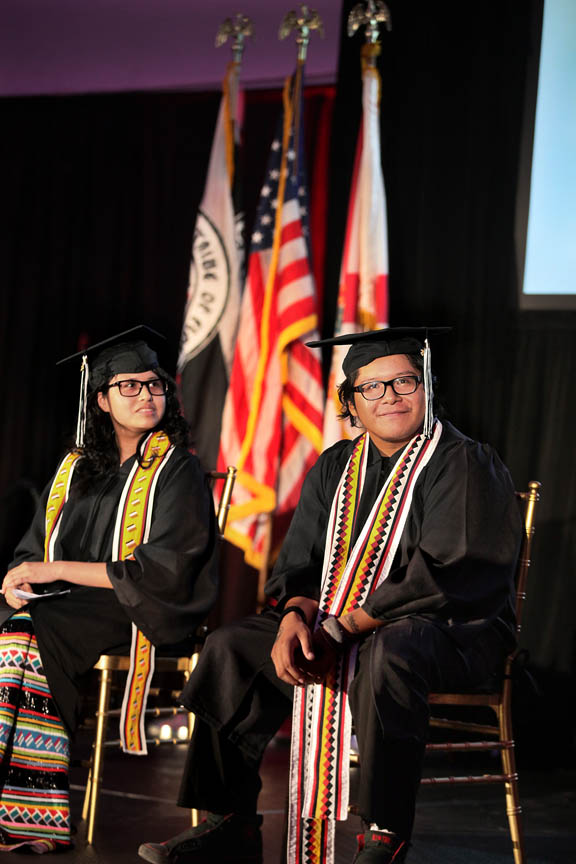 BIG CYPRESS — Small in numbers but rich in memories, Ahfachkee School’s Class of 2015 graduated May 29 in front of family members, friends, alumni and staff.

With the flags of the Seminole Tribe, United States and Florida unfurled in the background at the Herman L. Osceola Gymnasium and the iconic symbol for Ahfachkee School emblazoned on a large projection screen, Kaitlin Osceola and Darryl Billie, the school’s only graduating seniors, sat proudly on the stage.

“Education is everything as you move forward in life,” former Big Cypress Councilman Mondo Tiger told the graduates. “It’s something no one will ever take away from you.”

Alumnus Bradley Osceola, who graduated in May with an automotive technology certificate from Universal Technical Institute in Orlando, offered personal advice.

“The first day of college will be scary. You will nervous and stressed out … but as days turn into weeks and weeks into months, you will find that you are fine,” he said.

Alumni Tequesta Tiger, who attends The Art Institute of Fort Lauderdale, and Quenton Cypress, a current trainee at the Ah-Tah-Thi-Ki Museum and the Tribal Historic Preservation Office, also provided guidance for success after high school.

“This is your own journey. Only you can lead you,” Tiger said.

“This isn’t the part of life where you stop learning; this is where you start to do great things,” Cypress said.

Recently accepted to Florida SouthWestern State College in Fort Myers, Kaitlin Osceola delivered the valedictorian address. She began by shooting a Polaroid photograph of the audience.

“It’s so sad that so many pictures go undeveloped,” she said showing the still blank image and launching her speech.

Osceola proceeded to review the highlights of her high school experience, thank her family and teachers and assure everyone that she had goals to make and promises to keep. Before closing, she showed the photo that had developed clearly to reveal the faces of an audience eager to applaud the 17-year-old’s accomplishments – so far.

“Remember, we are all just capturing moments that need development,” she said.

Billie, 18, who will attend Full Sail University for music production, recording arts and writing, gave an emotional senior farewell speech. Funny at times, he shared memories that he aptly recalled and described as an emerging artist would.

“Thanks to Mrs. [Naida] Cumbermack, who told me to write more, because I started with one journal, then one story, then more, and through her constant writing assignments, I saw the true power of the pen,” Billie said.

Both graduates also recognized teacher Antonio Wright for his constant support and guidance. Wright called graduation night the happiest night of the year.

“But it is also the saddest night because it’s time to let our children go,” Wright said.