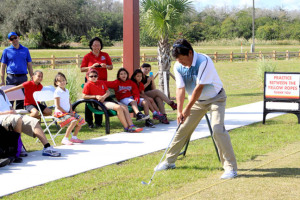 The four-time winner on the PGA Tour used just two clubs – a 7-iron and a 3-wood that he borrowed from Big Cypress First Baptist Church Pastor Salaw Hummingbird – to teach basic fundamentals of a golf swing Jan. 22 at the Tribe’s new practice range on West Boundry Road.

Gathered near a grassy hitting area, the kids watched and listened to a player who won more than $3 million during his peak years on the Tour in 1999 and 2000.

“That went into the clouds,” exclaimed third-grader Peggy Sue Cypress after Begay launched a shot with a 3-wood.

Begay, a Native American (Navajo/San Felipe/Isleta Pueblos) who learned to play golf while growing up in New Mexico, spent part of the 35-minute session explaining proper techniques for gripping, alignment and stance before he began hitting balls into the vast open field dotted with yardage signs.

“Find out what drives you, and want to be a positive part of your community,” Begay said.

Begay’s path to becoming a positive part of his community began when he was a youngster. Determined to learn the game, Begay said he collected recyclable cans and bottles on the streets of Albuquerque to scrape up the $2.50 for buckets of balls at a practice range.

“By age 9, there weren’t enough empty cans on the side of streets to recycle,” he said.

Eventually, Begay worked at a golf course and earned free practice time as compensation rather than money. Through relentless practice, he blossomed into one of the nation’s elite junior players and earned a scholarship to play at Stanford University, where he became a teammate and friend of Tiger Woods.

“Does anyone know a golfer other than Tiger Woods?” Begay asked the students, who responded, “no.”

Begay rarely plays in PGA Tour events these days, but he’s still a widely recognized figure in the sport as an analyst with the Golf Channel and NBC. He’s also involved in the Notah Begay III Foundation, an organization he created to promote health and wellness in Native American children while reducing childhood obesity and diabetes.

“Anything that you can do to keep their interest level – get them exercising, get them outside, get them committed to something – is beneficial in all other aspects of life,” Begay said after the session ended. “That’s why I’m a big advocate in these types of golf facilities and the sport of golf because it gets you outside…and it gets you away from screen time – the phone, the tablet or the computer.”

In addition to his foundation, Begay is also helping Tribes by designing their golf courses. He’s been involved in the construction of new courses for the Pascua Yaqui Tribe in Arizona, the Prairie Band Potawatomi in Kansas and the Eastern Band of Cherokee in North Carolina.

All the new courses use culture references in their names. For example, the Sewailo club in Tucson means “flower world” in the Pascua Yaqui language.

As for Big Cypress, Begay said he could envision a course on the reservation.

“I see the opportunity to build a beautiful, world-class 18-hole facility that would service primarily the community and the development of a first-rate golf program for the kids,” he said.

Begay serves as proof of a Native American who discovered a love for golf at a young age and turned that affection into a prosperous career.

“Florida is big into youth golf, and our kids have just as much talent as anybody else,” Begay said. “We have the opportunity here to really give them a leg up in terms of getting into a sport that is individually based. You don’t have the challenges of fielding a 40-man football team.”

Under the tutelage of Ahfachkee golf coach Amos Mazzant, youngsters learn all aspects of golf, including the sportsmanship core that tends to separate golf from other sports.

“We don’t grade them on how well they perform; we grade them on their ability to be kind to one another, how they treat one another, if they try at all. Those are all points,” said Mazzant, who gave Begay a tour of the range before introducing him to the students.