Skip to content
You are here
Home > Community > After nearly 50 years, Tribal Fair and Pow Wow continues to grow

HOLLYWOOD — About 46 years ago with the help of Judy Baker, Wanda Bowers spearheaded a popular annual Seminole tradition that would create a sense of camaraderie among various Native
American Tribes from all over the nation.

The tradition, known as Seminole Tribal Fair and Pow Wow, and the women’s efforts continue to be a part of a legacy that brings Native culture and arts together in dancing, singing, sharing, and eating. This year’s event will be held from Friday, Feb. 10 through Sunday, Feb. 12 at Hollywood’s Seminole Hard Rock Hotel and Casino.

A variety of activities are slated for the Hard Rock Live arena and outdoors on the east side of Seminole Paradise. One of the largest components of the Pow Wow is the list of dance competitions with more than $150,000 in cash rewards up for grabs. There will also be special reward opportunities available this year in addition to regular prize money.

A northern and a southern drum group competition offering prizes of up to $10,000 each will be one of the main highlights of the Pow Wow. There will also be a three-man hand drum competition for a prize of $500. Individual dance contests for all ages, including seniors, juniors, teens, men, and women, will also take place. Every age group will have the opportunity to participate in different styles of dancing based on their gender and will be eligible to win cash ranging from $100 up to $1,200.

With more than 250 dancers who participated last year in competitions, Bowers said she expects more participants this year. The dancers are judged on their ability to stay in step to the beat and look convincing in their storylines as they often wear different regalia, which denote tribal differences. Some of the dress and ornaments signify special events or honors in a person’s life, special religious traditions, and sometimes even legends.

Historically, there is a circle in most dances representing the circle of unity or cycle of life. Dancers often follow the clockwise pattern of the sun and have various styles of dances they can participate in.

Pow Wows signify the renewal of old friendships and the making of new friendships. They used to hold religious significance and were an opportunity for families to hold naming and honoring ceremonies. Some trace the word “powwow” to the Algonquin language and say non-Indians used it to mean a council or meeting.

“When I first started this, I didn’t know what I was getting myself into,” Bowers said. “Back then, Judy asked the chairman to start the Pow Wow but she was also a food vendor and she asked me if I could do the Pow Wow and before you know it, I got into my van with my girlfriend, and we drove up west to find out more about Pow Wows; that’s where I found out about rain, sleet snow, hail, and ice on the road. I experienced all the four seasons in one trip.”

Tribes from all over the nation will be coming in by the hundreds to enjoy a weekend that promises to be packed with socializing, music, all types of vendors, clothing contests, arts and crafts/fine arts competitions, alligator wrestling, wildlife shows, and plenty of food.

“Everybody come over; eat, drink, we’ll trade, we’ll talk, we’ll gossip, we’ll trade stories, and everything,” Bowers said. “But here… it’s about dance competition; it’s really just a big gathering of Native Americans and it’s turned into a big competition about their dance [other Tribes] or what dance you choose.” 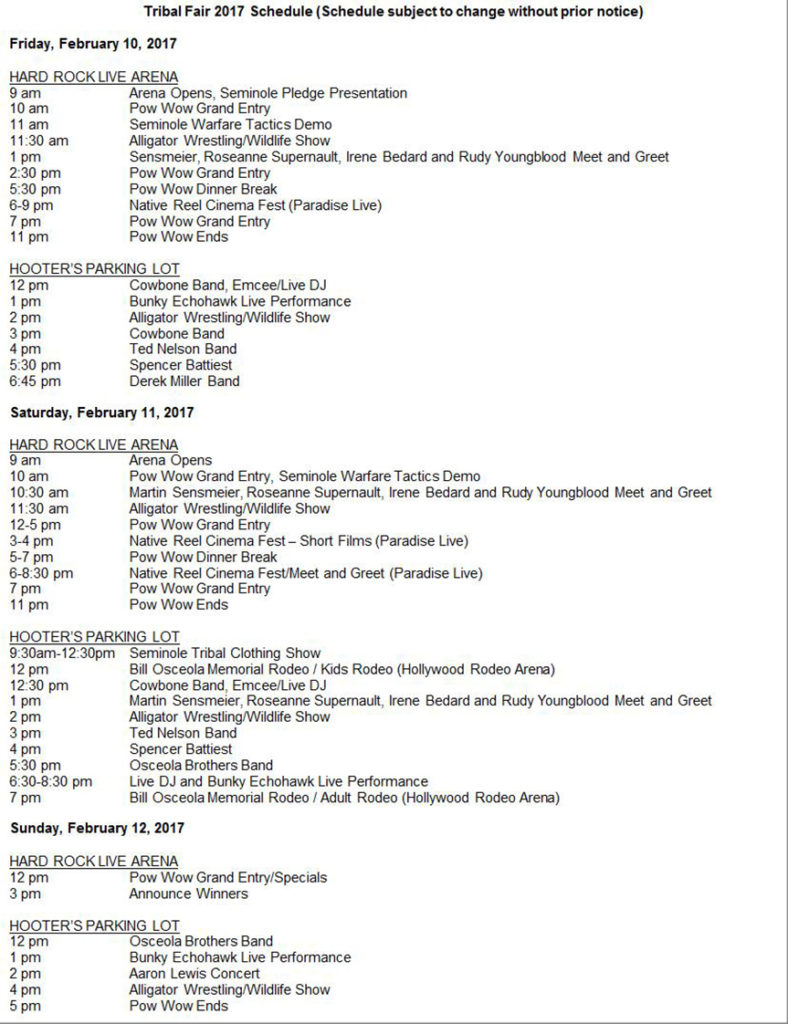