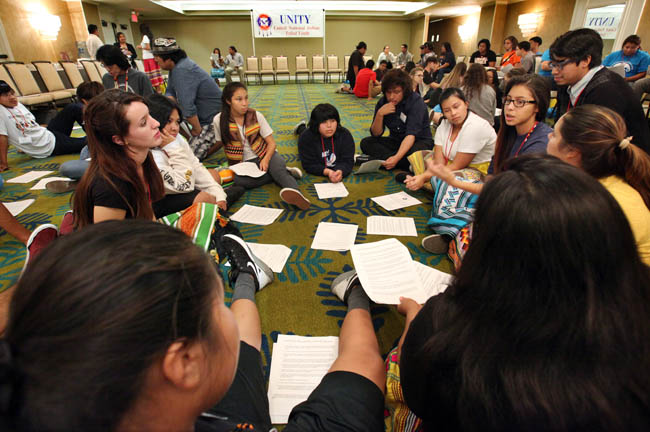 But the boom, boom, boom did not announce fun in the sun for the teens who traveled from as far as Oregon and as close as the Seminole Hollywood Reservation.

The rhythmic beat signaled the start of the National Youth Leadership Initiative, a weekend of training workshops hosted by the United National Indian Tribal Youth (UNITY) and the U.S. Department of Justice, Office of Juvenile Justice and Delinquency Prevention.

“The belief is that kids who run together will work together as adults in the future,” said Big Cypress Board Rep. Joe Frank during opening remarks. “And if one Tribe moves forward, we all move forward.”

“As long as someone is here to teach you, you must open your ears and open your eyes, learn what they say, take it home with you, share it with others and keep it in your heart always,” Osceola said.

Teen representatives from more than a dozen Tribes then launched into 22 hours of leadership training that could enable them to help others face down common social problems, such as bullying, substance abuse, teen pregnancy and suicide.

But first, they divided into groups to choose a specific issue that affects the community at large and create a project that could bring awareness to the concern. Issues included loss of language, unemployment and drug abuse.

The teens, most of whom are members of Tribal youth councils, learned how to brainstorm ideas and then conduct “brain-mapping” to outline plans on paper.

Step by step, they whittled lofty ideas into doable goals.

A handful of young adults who are the recipients of UNITY’s 2014 inaugural “25 Under 25 Native Youth Leadership Awards” served as mentors.

Melea McGhee, of the Porch Creek Youth Council in Atmore, Alabama, said she and three other council members attended to “get information, soak it up to take it back and make the most helpful council program ever.”

For Melea’s group, addressing loss of culture made sense.

“It’s a no-brainer because no one knows your community better than you,” Melea said.

The Miccosukee school participants also chose to tackle loss of culture. They devised a plan of attack that could require an entire culture day made up of presentations, walks and cooking classes.

Kaylene Osceola, of Trail, said language will play a big part in the culture day.

“Sometimes kids are afraid to speak to our elders in our language because we don’t feel confident enough. But we just have to keep trying because that’s how we’ll learn from them,” Kaylene said. “Without the words and the elders we’ll lose our culture. We have to start off somewhere.”

Kids received tips from UNITY members and directors for fundraising, advertising and media relations. Social networking factored high for keeping in touch and getting the word out.

The team will Skype, Facebook and email through similar events that will include job fairs and a career shadowing program.

Hollywood Board Rep. Steve Osceola, who served as a speaker during the event, advised teens to never stop networking.

He used the Seminole Tribe communities as an example for the importance of communications.

“We are geographically disconnected but here we are with great need for understanding what is going on. We have to network because we are all one people. Let’s help each other … let’s work together to be self-sustaining,” Rep. Osceola said.

At the helm of the event were UNITY staff members led by executive director Mary Kim Titla. Based in Mesa, Arizona, UNITY was established with a small group of teens from Oklahoma City in 1976 but now makes up a network of 142 youth councils in 35 states and Canada.

The UNITY mission? “To foster the spiritual, mental, physical and social development of American Indian and Alaska Native youth, and to help build a strong, unified and self-reliant Native America through involvement of its youth,” according to its website.

“What it boils down to is having young people exposed to positive role models and positive energy so that they leave energized, encouraged, with a strong voice and knowing they have an important place in this world,” Titla said.