OKEECHOBEE — A young contingent from Pemayetv Emahakv Charter School excelled at the Okeechobee County track and field meet by throwing softballs farther, jumping longer and running faster than their opponents.

PECS students finished in first place in six events May 6 in a meet that drew elementary and middle school students from throughout the county to Okeechobee High School’s football stadium.

With older kids from PECS unavailable to compete due to other activities, the Seminoles relied on students from younger grades to represent the Brighton Reservation, and they didn’t disappoint.
Carlee Osceola and Kaiden Warrior each won their age groups in the softball throw on the football field. Carlee threw the ball 115 feet in the girls 9-10 competition while Kaiden heaved it 138 feet in the 11-12 boys group.

On the track, PECS’s future looks bright thanks to Bryce Baker, Lexi Thomas and Carriss Johns. The trio notched one victory each in the 9-10 age division.

“I like running, and it makes me healthy,” Lexi said as she chugged down a blue Gatorade after winning the 400 meters run.

Bryce trailed in his 400 meters race, but he surged past the leader on the backstretch and never relinquished the lead.

“He was ahead. I didn’t think I would catch him,” Bryce said.

Carriss showed plenty of speed by winning the 50 meter dash in his age group in 16.74 seconds.

“I hope that some of them will see that they are gifted in running and will pursue track and field when they get to high school,” said PECS physical education teacher Pam Matthews. “There are some that I can see now in first grade or second grade that they would be fantastic track athletes if they stick with it.”

Relay races that were slated to be the final events of the meet were cancelled because of time consideration. 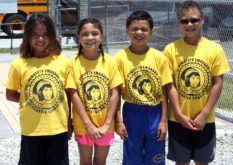