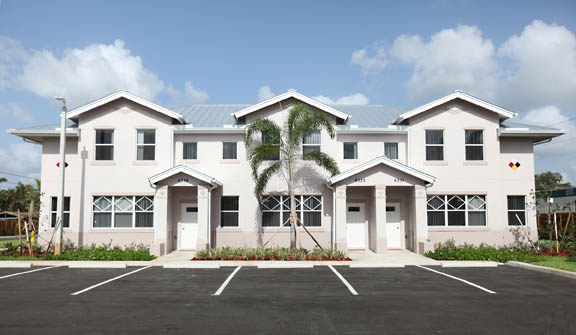 HOLLYWOOD — It took only eight months for the Tribe to erect eight townhomes for community members on the Hollywood Reservation, a testament to departments working together to keep on schedule, said Housing regional manager William Osceola.

“Everyone stayed involved and on the ball,” he said, referring to the Housing Department, Construction Management Department, Seminole Stiles and Council and Board offices, among others. “We met regularly and planned ahead.”

During a grand opening celebration Aug. 6, community members toured the buildings – complete with generators, granite countertops and fenced backyards – and renters signed the leases to their new homes.

“My priority for the next two years is housing,” Hollywood Councilman Chris Osceola said. “That’s the biggest need for the Tribe right now. There are about 300 people on waiting lists tribalwide. That’s got to be the priority.”

In Hollywood four to five more ADA-compliant units will be built adjacent to the new townhomes with money left over from the construction of the Howard Tiger Recreation Center. Construction is scheduled to begin by the start of 2016 with completion in the summer, Nelson said.

“The Tribe is going in the right direction to provide efficient housing,” he said.

“We hope to break ground in about five months,” White said, but completion dates are unavailable because project details have yet to be ironed out.

The rental units help satisfy housing demands for younger Tribal members who may not have established credit or others who may not want to take on mortgages, Nelson said in a news report in April. He cited access to clinics, police and fire rescue, and after-school programs like 4-H and Boys & Girls Club among the perks to living in tribal communities.

Nelson said the townhome projects have proved successful. He said the Tribal Community Development Department – which consists of Community Planning and Development, Construction Management, Environmental Resources Management, Housing, Public Works, Tribal Inspector, Real Estate and Survey – will look to continue that success with other housing and infrastructure projects in the future.

“We’re working with all Tribal Community Development departments to provide planning for the next five years to save money and create efficiency with development,” he said.

Nettie Stewart, who received the keys to her new townhome Aug. 6, said she is thrilled to be coming “home” to the Hollywood Reservation. Although she has lived on the reservation most of her life, she has lived off-reservation for the last six months.

“Being on the reservation is just being home,” she said. “You know where everyone lives, and we are all connected to everyone either by blood or by Clan.”