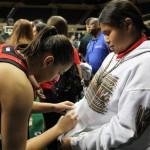 TAMPA — Nearly 200 Seminole Tribal members of all ages and from all across Florida, showed up at the University of South Florida (USF) gymnasium Jan. 12 to cheer on the fifth-ranked Louisville Cardinals, as they held off the USF Bulls, 62-54, in an NCAA Division 1 women’s basketball game.

Actually, it would be more correct to say the Seminoles went to watch and cheer for the Schimmel sisters, Shoni and Jude, the nationally known Confederated Tribes of the Umatilla athletes who star for Louisville – one of the nation’s top college hoops programs. The world seemed to discover the Mission, Ore. natives last season when the Lady Cardinals came one game from the national championship, losing the finale to the powerhouse University of Connecticut.

A documentary Off The Rez, directed by eight-time Emmy-Award winning filmmaker Jonathan Hock, brought the girls and their family to screens across the world and their fame was secured.

“It’s indescribable,” Shoni Schimmel said, waving her arm across the expanse of Seminoles who gathered for a meet and greet after the game. “I never expected this.”

“It’s been very rare for an American Indian girl to be a starter on a major college basketball team,” Thomas said. “Our girls can identify with the Schimmel sisters. To watch them play is very inspirational to all of us.”

A race and gender demographics search by the NCAA found that during the 2011-12 academic year, only 21 women and four men identified as American Indian/Alaska Natives participated among the 10,151 basketball players at the Division I level.

Homemade signs cheering on the Schimmel sisters could be seen in the stands on both sides of the court, outnumbering those holding USF Bulls or Louisville Cardinals placards.

“It is like this everywhere we go,” pointed out a smiling Shoni Schimmel, 19, a 5-foot-9 senior guard regarded as one of the best players in the country. “It feels so good to look into the stands and see so many American Indian faces.”

She scored 11 points within three minutes near the end of the game – a trio of three-pointers and a layup from a steal. She sealed the Bulls’ fate, after the home team had rallied from a 17-point deficit to two points with seven minutes left to play.

Shoni Schimmel led all players with 25 points, earning a roar from Seminole fans with every basket or rebound.

“We were surprised when so many people started coming out to see us, asking for autographs and all that. We never expected such a thing and really did not know what to make of it. Now we feel very honored to have so many friends care so much about us everywhere we go,” said Jude Schimmel, 17, a 5-foot-6 junior guard who did not suit up for the USF game because of a sprained ankle; but she was there, block of ice taped to her lower leg, for the post-game meet and greet.

After the game, Tribal members filled the stands in one section, then formed a long line to take photos and have the players sign T-shirts, ball caps, bare skin and anything that would take a signature.