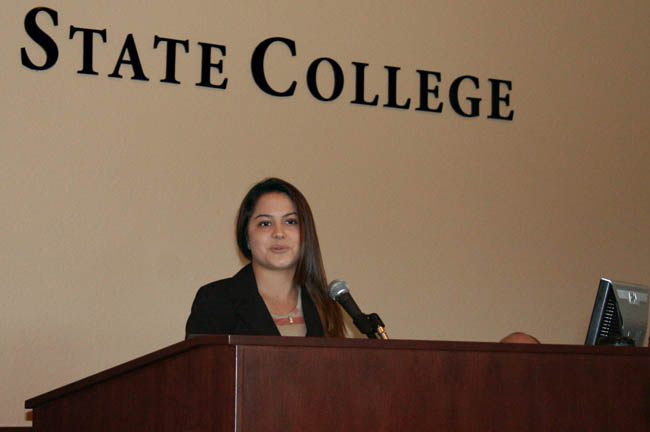 OKEECHOBEE — Apple Nunez continued to shine as an academic star Dec. 12 when the 15-year-old from Okeechobee was a guest speaker at Indian River State College’s (IRSC) bimonthly meeting for student services.

The meeting, which rotates through IRSC campuses, was held at the Dixon Hendry campus, giving the city of Okeechobee a chance to put a few of their own in the spotlight, including the Seminole Tribe’s Apple.

IRSC provost Russ Brown said Apple is a “rising star” in the community because she easily navigates through college classes.

“She is very strong willed, goal oriented, well organized to manage her time to be successful in classes, as well as manage the schedule that she has,” Brown said.

Apple spoke before 120 academic professionals. She touched on earning an associate degree through dual enrollment while earning her high school diploma, which she will receive next May, all by the age of 16.

In complete control, Apple thanked the school for helping her pursue her academic goal, and she reflected on how the past year has changed her outlook on life.

“I just went through a flashback of when I started, the reason that I started and how much of a change it has been this past year – what a difference my education has been,” Apple said. “A year ago I could have been just another high school student and today I’m giving a speech at IRSC as one of their star students.”

Apple admitted that she was surprised when Brown first approached her.

“He pulled me into his office and I thought about all the bad things I could have done and then he ended up asking me to speak at this event,” she said. “I was blown away at the opportunity that he was giving me to speak in front of so many people and the trust he was putting into me to come and speak at his meeting, on his behalf and on his recommendation. It meant more to me than actually giving the speech.”

Apple captured the attention of many professionals in the audience because she has helped shine light on IRSC’s dual enrollment program and has shown that if someone wants something bad enough and works hard enough, he or she can achieve it.

“I am so impressed, so amazed at her accomplishments, to think that she has accomplished so much at such a young age and seems to have overcome every barrier and obstacle that has been put in her way,” said Mary Locke, IRSC vice president of Instructional Services. “To be able to get up in front of a room of over 100 adults and to be able to speak so eloquently and naturally about her achievements in such a warm, poise and confident manner, I know I could not have done that when I was her age.”

Brown is no stranger to the Seminole Tribe or their educational efforts. He is the former principal of Pemayetv Emahakv Charter School.

Brown said Apple is a role model, especially to children at the charter school.

“I’m hoping more Seminole Tribe families and children pursue it, that they see what Apple has been able to do and the doors that it has opened for her and will open for her career wise,” Brown said. “I think she has now paved a path that others can follow.”