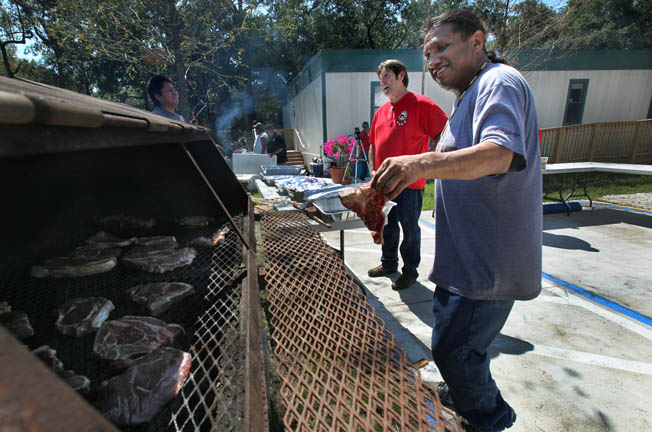 HOLLYWOOD — With the Andy Buster Band playing country tunes and homegrown steaks smoking on the barbecue, Tribal members celebrated a new stop along the road to addiction recovery with an old-fashioned family picnic.

“Only an open heart can catch a dream” reads a plaque on the wall of the new We Do Recover headquarters – a double-wide trailer with a kitchen, meeting area and super-soft lounge chairs on a half-acre plot dotted with chickees, trees and a bandstand tucked behind a smoke shop on the Hollywood Reservation.

“This is our place to be,” said Charlie Tiger, co-founder of the program, its current site director and a self-described work in progress. “And I thank God because He’s driving my ride.”

Tiger said the program moved into the trailer-turned-headquarters in March, but it was established five years ago as a grassroots rehab-to-work program by former President Richard Bowers and Tribe member Virginia Osceola with the blessing of former Chairman Mitchell Cypress.

Four years of sobriety, proof of a healthy work ethic and professional on-the-job training could clear the way to lasting careers within the Tribe.

“It’s not a handout. It’s a stepping-stone up,” Buster said.

Bowers said he became concerned in 2009 when several Tribal members were consistently missing from community meetings. When he later found out that some were in drug or alcohol treatment, or incarcerated for substance abuse law violations, he began meeting them one-on-one. Soon, he witnessed the revolving door of recovery – the back and forth of treatment and addiction.

“They were the lost people. We reached out and offered them support because when they came out, we did not want them to slip back in,” Bowers said.

Buster said those who have arrest records are even less likely to find meaningful work due to background checks that deter companies from employing felons and recovering addicts.

Bowers and Osceola began putting them to work on manual labor jobs that included painting, landscaping and general maintenance. Tools and supplies were borrowed, and workers used their own vehicles and gas to get from job to job.

Bowers said Tiger and Amos Frank “carried the ball” on the grassroots project that was supported with love and care from the ground up.

“We gave it fertilizer and water. Now it looks like we’re blossoming,” Bowers said.

For workers at the new We Do Recover trailer, Bowers’ observation is literal.

The formerly woodsy 4-H Club property off Sheridan Street near State Road 7 was hand cleared and developed by Tiger and his crew.  They removed huge rocks, planted trees and flowering shrubs, built chickees and laid paving stones and wood for parking spaces. They fashioned a table around a tree trunk, erected the sheltered band stage and put up a fence. A shiny hubcap, strategically placed on the fence, makes for rustic clubhouse art.

Tiger said the road to recovery is an endless journey but We Do Recover allows for successes along the way.

“What helps recovery work is work. I was one of the worst going in and out of prison that sometimes I can’t believe I am still here to talk about it,” Tiger said. “Anyone can do it, though, if you give them a place to be.”