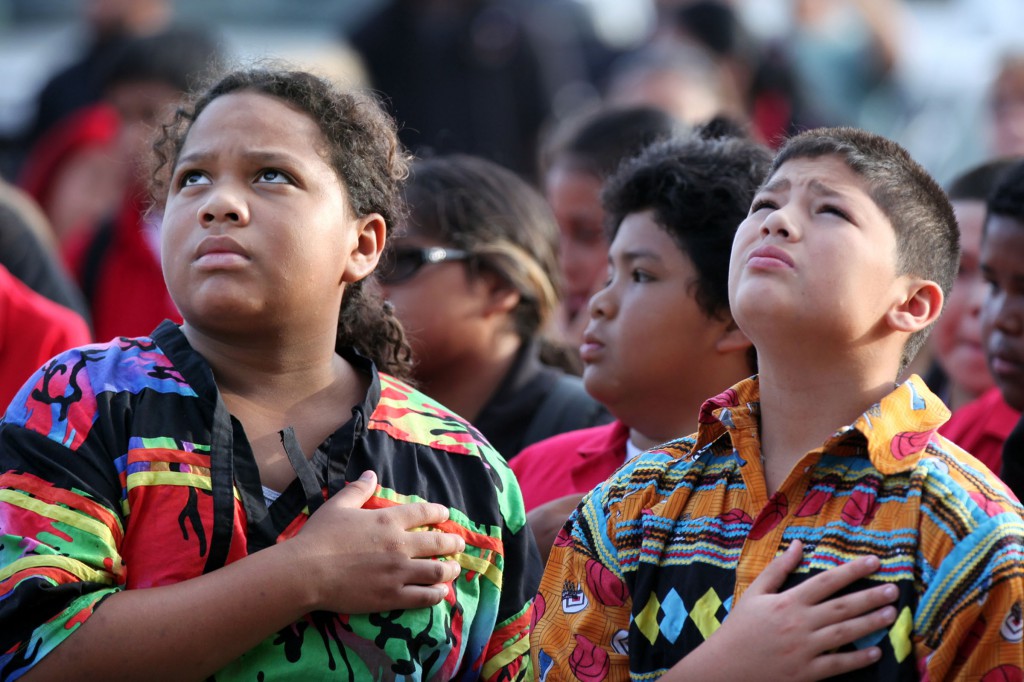 “When the public schools took prayer and the salute to the flag out of the classroom, a group of Texas kids gathered outside to pray anyway,” said the Rev.  Salaw Hummingbird, pastor of Big Cypress First Baptist Church who led the early morning prayer meeting.

In 1990, 10 Texas teens went to local schools under the cover of night to ask for God’s blessing on friends, teachers and local leaders.

The movement has since spawned thousands of See You at the Pole events now held on the third Wednesday in September worldwide.

On the Big Cypress Reservation, children from kindergarten through 12th grade were escorted from Ahfachkee to the flagpoles across the street that wave the colors of the American, Seminole and Florida flags.

With hands over hearts, students Nicholus Andrews and Jordan Osceola led the crowd of nearly 150 people in the Seminole and American pledges of allegiance.

Pastor Hummingbird assured children not to worry about recent tragic school events, such as shootings that have occurred in other schools throughout the nation.

“We all hear about things that happen  . . . but we have a great police department and great emergency response workers,” he said.

Lt. Victor Madrid, of the Seminole Police Department on Big Cypress, challenged children to say no to drugs, violence and temptations that could lead them to make bad choices.

“Take God into your life instead and let God guide you,” Lt. Madrid said.

Big Cypress Board Rep. Joe Frank implored teachers and parents to go above academics when guiding children through school.

Holding the Bible, Hummingbird quoted 2 Corinthians 7:14 – “If my people who are called by my name, shall humble themselves and pray, and seek my face, and turn from their wicked ways; then I will hear from heaven and will forgive their sin, and will heal their land.”

“We’re fortunate here on Big Cypress Reservation to have leaders who believe in prayer, especially in our Native world,” Pastor Hummingbird said.