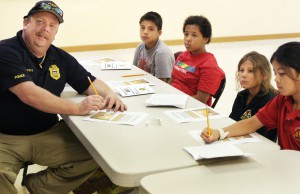 BIG CYPRESS — Picture the scene: A man is found dead in the desert, clutching a straw; he has no external wounds and there are no signs of any other human presence – no tire tracks or footprints.

How did the man get there?

Feb. 27 was Crime Scene Investigation night for the Police Explorers on the Big Cypress Reservation, and the group of seven children, ages 7 to 13, was allowed only 20 questions and 30 minutes to construct a theory.

“Remember, you have to look for the details. The answers are in the details,” said Fred Mullins, a counselor for the Family Services Department in Immokalee who helps out when called in by the Police Explorers Program.

But first, Seminole Police Department Officer Jeffery “Scott” Akin, in charge of the Explorers Program for Big Cypress, led the children on a quick-thinking, detail-seeking and child-friendly game ripped from the reality television crime program “The First 48.”

Photographs were projected on a screen in the auditorium of the Boys & Girls Club. Two photos, side by side, seemed exactly alike but contained subtle differences. Children had only 45 seconds to call out the differences and beat the clock.

In the beginning, the kids lost to the clock.

“If you were in FBI school, you’d have flunked out of class,” Mullins said.

In real life, as seen on “The First 48,” clue-gathering is a race against time, Akin said. Typically, if a case is not solved within two days’ time, the chances of solving decrease by 50 percent.

At a previous Police Explorers meeting, the children learned how to lift fingerprints from a crime scene.

“Just like fingerprints, you have to get the facts as soon as possible,” Akin said.

But by the third photo comparison, the junior sleuths had become fast enough to be considered “Rookies.” By the fifth comparison, they were promoted to “Officers.”

Akin reviewed other crime investigation pointers that were discussed during previous meetings: Establish a chain of command. Keep a crime scene log of everyone at the location and all details within the yellow police tape. Don’t let anyone else inside.

Figuring out how the dead man came to rest in the desert provided intense CSI intrigue – and a common mistake among imaginative wannabe cops. Most of the children concocted theories before asking enough questions.

Elisah’s theories included a camel, a biplane, a desert mirage and death by dehydration.

“It could happen,” he said.

Yes, but not likely, according to the clues.

“It’s fun to speculate, but you have to justify the theory,” Mullins said. “The straw is a small thing, but it can be what breaks the case.”

Further questions led the children to surmise that the straw was used somehow in connection to a hot air balloon, but time was up for guesses. The dead man was the fourth passenger in a hot air balloon that was losing altitude due to weight. Someone had to go and, apparently, the dead man pulled the deciding straw.