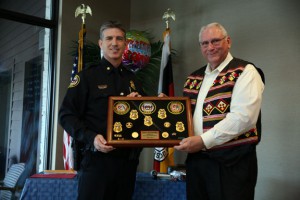 BRIGHTON — After 21 years of dedication to the Seminole Police Department (SPD) and a life devoted entirely to service, Brighton’s Jerry Meisenheimer retired on Dec. 31.

Family, friends and fellow officers came together to honor and celebrate Meisenheimer during a retirement party at the Elder’s Building in Brighton on Jan. 3.

“We are here today to pay tribute to one hell of a cop who has reached the sunset of his career,” said SPD Major Larry Massey.

Meisenheimer grew up in Wisconsin and devoted himself to service early in life. He became a monk in a religious order and spent time traveling in Africa helping the less fortunate hunt for food. After five years, he moved home and met his wife.

In 1967, Meisenheimer transitioned into law enforcement, working as a homicide investigator in Wisconsin until he and his wife decided to move to warmer weather in 1978. They moved to South Florida where he worked for the Broward Sheriff’s Office (BSO) for the next 10 years.

“When I started here in Brighton, there were only three officers working at a time, and after two o’ clock in the morning, there [were] no officers,” Meisenheimer said. “We didn’t even have radios. We used bag phones.”

He was asked to work weekends at the newly opened casino in Immokalee and ended up staying there for three years; he was promoted to Sergeant.

Eventually, Meisenheimer transferred back to Brighton. Still a Sergeant, Meisenheimer started the D.A.R.E. program in Big Cypress for youth, commuting back and forth for eight years. He worked with youth in Brighton as well.

“That was the highlight of my life because I really enjoy having the kids, and I looked forward to their lessons,” he said.

In addition to working with youth, Meisenheimer was a traffic homicide detective.

Still climbing the ranks, he was promoted to Lieutenant over Brighton and Fort Pierce. He was the first officer to work in the Fort Pierce community.

After years of service, he was once again promoted to Administrative Captain in Hollywood, overseeing records, evidence, training and budgets.

He eventually moved back to Brighton where he finished out his career.

Meisenheimer said he is going to miss the Tribal members the most, but he looks forward to spending time with his wife of 45 years, his four children and six grandchildren. He also plans to continue traveling. He’s already been to 55 countries and plans to go this summer to Pembroke, N.C. for a visit with the Lumbee Tribe.

Meisenheimer, who said he loved his career with SPD, hopes to possibly come back and work for the Tribe in a different capacity.

“My time here has been wonderful…I appreciated everything the Tribe has done for me and hope I made a difference,” he said.