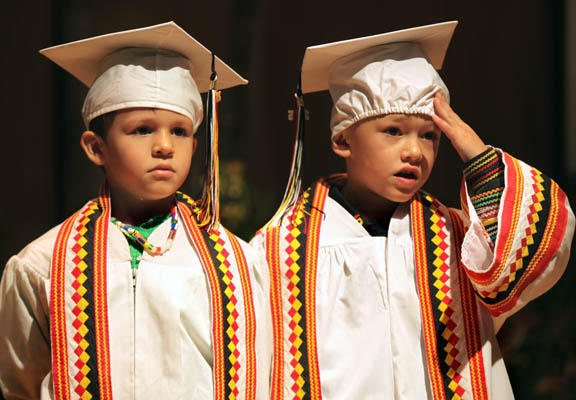 Following the theme “I am a Seminole,” students first showcased their language skills by reciting the Pledge of Allegiance in Mikasuki for family and friends in attendance. A “Twinkle, Twinkle Little Star” rendition, culture skit and “I am a Seminole” performance led by Fred Mullins, of the Family Services Department, on guitar further displayed what students learned in culture classes throughout the school year.

“Our mission is to instill the culture and language in the students,” said Preschool Center Director Thommy Doud. “We work closely with the Culture Department. We need to get kids fired up about education at this age because this is just the beginning for them.”

After a quick wardrobe change, students dressed in costumes depicting what they want to be when they grow up. Some, like Redfeather Robbins, want to be firefighters, while others want to be construction workers (Justin Rodriguez), cheerleaders (Jenesys Ta’Lacey Stewart) and nurses (Jahcelin Lysandra Calisce).

“It’s never too young for a child to have a dream,” Doud said. “With curiosity, knowledge, encouragement and love, they can be anything they want to be.”

“Embrace them; time goes by fast,” said Councilman Osceola, who added that his daughter, Hailee, would graduate high school June 3 and attend Florida State University. “When they go out in the real world, all they have is what you gave them.”