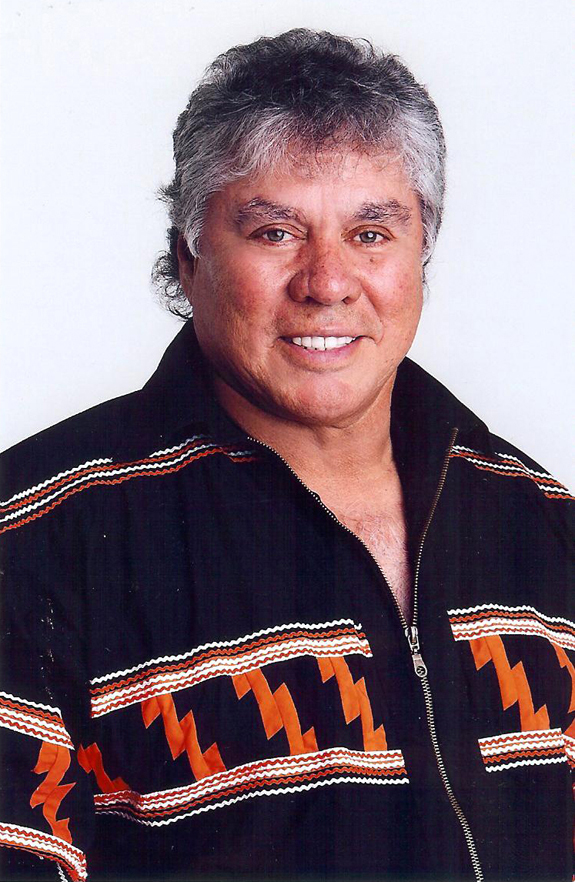 I’ve been travelling down this road since about 1946 or ‘48. I’ve been seeing this road basically all my life. I’m 72 now, so it must’ve been before 1950 that I first saw that dirt road. Back in those days, it didn’t look like it does today. You can see the ditches alongside where they had dug up that dirt – it was sort of a brown rich-looking dirt. Now that I think about it, that really was a rich soil.

The way we had to travel on it is we kept boards with us, in case the vehicle got stuck. We’d stick the board underneath the tire, push it on, and off, and then take off … all the way from the reservation to Highway 80 and back.

Back in those days it was exciting. I was only about 4 or 5 years old, and every time a car got stuck I thought, “Oh boy, I get to see this new excitement: getting the car out!” It was an art as to how you pull the car out, because sometimes you have to find a log or something to lift up the tire, and put the board up underneath. It came in handy later in Vietnam. When our jeep got stuck, we’d do the same thing. Today it still comes in handy.

Anyway, people would ask me. “Where were you born?” I’d tell ‘em, “Over in Fort Lauderdale.” They’d say, “I thought you were from here.”

“No, I was born in that chimpanzee farm over on Highway U.S. 1.”

“Wait a minute. Are you joking?” they’d say.

“No, I was born in that zoo they had over there.” From the Chimp Farm we came on over to here. I was raised just about all over the place: along Highway 41, right here, Big Cypress, all over.

Anyway, I remember when I first heard the words Devil’s Garden, the person I was standing with was my clan uncle, Morgan Smith. He was a Creek Seminole from the Brighton Reservation. How he wound up down here I don’t know, but I understand that he was driving some cattle from Wauchula to Big Cypress.

Anyway, we were riding on this road one day and I said, “Why do we call this area Devil’s Garden?” He gave me some made up thing that there used to be a guy by the name of Willie Frank. He said, “Somewhere down this road, maybe a little bit further up, is Tom Hall and Ray Hall’s camp.” There’s a cow pen I think is still there. Their camp was just on the other side of that route that cuts across to 846. We were right about there when I asked that question.

Morgan says, “Right out here in that little slough there it was dark, and there was something that when we were driving by once, we saw these eyes bopping up and down, and Willie Frank stabbed one of them, but they disappeared.

I was kind of scared and I would never try to wander off too far in this general area. Then years later, I’m talking about many years later, I’m talking about 1970. Early ‘70s. I started reading some books — yes I can read! I started reading some history books and this name kept popping up: Sam Jones. Abiaki. I didn’t know Abiaki yet, but it was the name Sam Jones. This military man had written some documents in there that proved this man had been in this general vicinity.

They tried to capture the Indians around here because this was a nice, fertile land with a bunch of hammocks. If you’re flying in the air or something and you looking down, you’ll see different hammocks all over the place. When it dried up, the Seminoles would make little farms on different hammocks and there were little gardens.

When I read that, they said there were different forts for soldiers all over the place, like Fort Denaud, I think, somewhere around LaBelle area, another one, Fort Shackleford, right in Big Cypress. Fort Drum, Fort Myers, Fort Pierce, Fort Lauderdale. The minute they got set up, they would triangulate and try to capture all these Indians.

And Sam Jones was the prize Indian they wanted to capture.

Anyway, the military came south from LaBelle, pushing through to here, and they came upon a garden and the tools were still there. It looked like they had just left. From that point on, I guess ol’ Sam evaded the military so much that they started calling him ol’ rascal, or that ol’ devil. “He must be the devil because there’s no way he can escape us, even though we come upon him like this.”

So they started giving him the nickname, The Devil.

One particular story from the way I can visualize it, is they came upon another garden and he escaped them again. The whole building disappeared. They used to have canoes laying, I guess there was a little more water here back in those days, and they just disappeared into the swamp.

When they came to that garden, “This must be The Devil’s garden and he escaped us again. They tried to chase him down but they could never find him. From that point on, the story or that word got stuck: The Devil’s Garden. It’s still a very fertile area, so to this day, there are farms and ranches all over here. I don’t know who, but I thought I saw some marijuana plants going over here somewhere. Maybe it was hemp growing …

This is a very nice area, so from that day forth it became known as The Devil’s Garden, and today we stand here thinking about who started this stuff.

Now, the part that I don’t know, Bobby Henry was just asking me, how did he get the name Sam Jones? I have no idea. Maybe Patsy will have the answer to that. Let me back up just a second. The reason why the Seminoles never really said anything about him until I brought it up in the 1970s is because when somebody dies that has some great stature about him, something good about him, warrior or whatever, when he dies, you don’t know if his spirit will come back in a mean manner or a good manner. Just like that “Pet Cemetery.” Have you ever seen that movie? Somebody dies and they come back meaner than hell? Well, they don’t know if it’s kind of like that, so you never mention that name again.

To this day, for the ones that know, we generally do not mention the name when somebody passes away. If James Billie died over there, and there’s my son standing there, someone might say “You all remember Micco’s dad?” You would say it in a different matter, but you never say James Billie. If it was me, I will come back and haunt you!
It never came across the Seminoles’ tongues again from the day he died till 1973. I don’t know if I brought a curse back or something good back. I’m kind of glad we brought it back so everyone could know who he was; he was a great leader.

Anyway, it was those types of superstitions or whatever it is that we have in our culture that held his name at bay until I was reading that history book somebody wrote, and that’s how he came forth today. I don’t feel embarrassed about it, I’m glad to know that Sam Jones is still here.

When I was about 12 years old on the Big Cypress Reservation, tourists would come by and sometimes I’d be alongside the road with a fishing pole, and they would stop by and ask me, “Hey young man, do you know this spot,” and they would show me some old Florida map, and in red it would say Sam Jones’ Old Town. The people from Big Cypress would say, “Right off the reservation there used to be a bunch of pine trees.” They would say, “That’s where some man used to live that the white people are talking about.”

I just took it for granted. That’s the only way I knew about Sam Jones’ Old Town. I never really knew where he was buried or anything, because, naturally, I wouldn’t have known. Later on, somebody put a bunch of orange groves over there, wiped out that whole camp, so now it’s a grove of orange trees.

Right off on the McDaniels Old Ranch, there is a marker there that says Sam Jones’ grave, and I think we just got that piece of paper today.

Anyway, today, for me, is historic. I’m glad I was a half instigator of it. Now you know the story of who The Devil was. And how Sam Jones got his nicknames, right here along Sam Jones Trail in this area known as Devil’s Garden.

James E. Billie is Chairman of the Seminole Tribe of Florida. Taken from his remarks at the commemoration ceremony of the Sam Jones Trail, Aug. 14, 2016