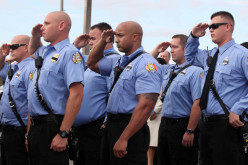 HOLLYWOOD — Standing at attention, with badges swathed in black bands and eyes fixed on the Seminole, Florida and United States flags, Tribe employees who protect and serve remembered fellow firefighters, police officers and all others whose lives were taken by terrorists Sept. 11, 2001.

“It was the Vietnam of our era,” Seminole Tribe Fire Rescue assistant fire marshal Bruce Britton said during the memorial held at the Seminole Public Safety Building in Hollywood on the 13th anniversary of the attacks.

About 40 representatives from Seminole Police and Fire Rescue Departments arrived in the searing morning heat dressed in formal uniforms to observe the day etched in memories as 9/11.

“If you are older than 7, you will never forget where you were and what you were doing on that day. It will always be a difficult day,” Britton said.

Al-Qaida extremists flew hijacked airplanes into the twin towers in New York and the Pentagon in Washington, D.C. A fourth hijacked plane, likely headed to the Capitol to be crashed, was retaken by passengers before it crashed into a Pennsylvania field.

The violent morning left 2,977 victims dead, thousands of families shattered and a nation in shock and grief.

District chief Doug LeValley, who spoke at the memorial, said he was one of many South Florida first responders deployed to New York within hours to assist at ground zero. His friend, John Fanning, battalion chief of the New York City Fire Department’s Hazardous Materials Operations Unit, died in tower two.

“Twenty-one days later I was able to return home, but the whole time I was there working on the mound I was thinking of John Fanning, who we called Jack. Jack was somewhere under my feet,” LeValley said.

LeValley recalled the search and recovery mission as his duty to bring closure to loved ones.

Aircraft pieces were placed aside for later inspection as the deceased were removed from the rubble with great respect and honor.

LeValley said the recent memorial helped remind first responders that real heroes are “the ones who sacrifice themselves to save others.”

In intervals, dispatch tapes were sounded to timeline the attacks. A recording of “Amazing Grace” by a lone bagpiper closed the hour-long memorial.

“We are just people sent out to do our jobs,” LeValley said. “We protect and serve in different ways but always for the community, whether at ground zero or right here at home with the Seminole Tribe.”