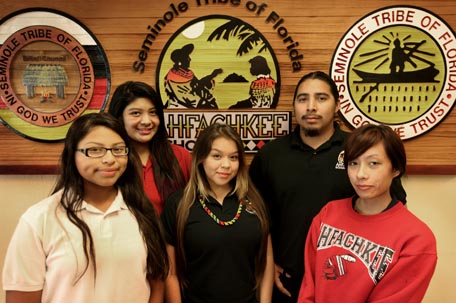 BIG CYPRESS — Big changes are happening at Ahfachkee School and heading the charge is a new team of student leaders.

For the first time in the Big Cypress Reservation school’s history, a Student Council has been elected by peers to inspire and guide the next generation of alumni.

“We’re determined to make the school an even better place,” said Michelle Jimmie, 16, who serves as treasurer of the newly established organization.

Betty King, Ahfachkee’s former administrative assistant who worked at the school 21 years before retiring in December, said student leader groups existed unofficially in the past but the recent institution of a formal Student Council is unique.

The group’s faculty adviser Jarrid Smith said students were nominated in November to serve. Elections occurred within a week.

Eighth-grader Gherri Osceola served as Vice President until winter break when she transferred from Ahfachkee to a school off the reservation.

“Serving on the Student Council is a responsibility. If we make a wrong decision, like have a bad fundraiser, then it reflects badly on us and the school. But if we do something good, then people see us as good, creative people and good role models,” Gherri said on the last day of her service during the Candy Cane Gram delivery.

Gherri said she hoped that her short tenure made an impact – especially as a pioneer for the group.

Smith said the group aims to represent a variety of outstanding qualities to which all students should strive, such as peer leadership, school pride, community involvement and academic achievement.

So far, the Student Council held two good-cause events. Scores of toys were donated by Ahfachkee families for the U.S. Marine Corps’ Toys for Tots drive to make Christmas bright for needy Florida children. About $400 was collected during a Candy Cane Gram fundraising campaign to pay for formal club T-shirts and other gear.

Entertaining events held to invoke school cheer and incite intramural participation kicked off in late December with a series of dress up days that included Twin/Flock Day and Super Hero/Villain Day.

“We called them spirit days and we made them super fun,” Nashoba said. “Everyone got a kick out of it.”

Quenton said the group is already playing a “major role” in the school and collectively looks forward to making a positive impact on the entire community. Plans will be made soon to involve students in social events and causes within and outside the school.

“Whatever we can do to move everyone forward, whatever opportunities come up, we will take them,” Quenton said. “We want to be a group that people will look back on and remember.”